Many years ago, I wrote a few articles for a (now defunct) website called Pop Culture Shock. In fact, the first post I wrote for the PCS team was actually a piece that I had pitched to ToyFare Magazine years before: the five best Asian American action figures on the market.

Unfortunately, when PCS died, most of my posts passed along with it. The good news? My original action figure post still lives over here! But it’s been a while since I wrote that initial assessment, so I figured I’d revisit the topic. It also helps that there have been a few more Asian Americans who have had their likenesses immortalized in plastic during those intervening years. So why not start with the most important Asian American basketball player to ever see the hardwood? That’s right, I’m talking none other than Linsantiy himself:

In my old list, I disqualified Yao Ming because he wasn’t American enough — though I now see the folly in such a limited view of what “Asian American” means. Also because I’m actually not a big fan of McFarlane’s Sports Picks figures. The main things I want out of an action figure are great sculpts, copious amounts of articulation, and nice paint apps. While McFarlane tends to deliver on the sculpt and paint (though they can be hit-or-miss), they’re little more than semi-poseable statues. That said, I am and will forever be a sucker for those old Starting Lineup figures from Kenner! Nostalgia is a powerful thing.

This Jeremy, though, is a pretty good likeness of Asian America’s favorite basketball player. It’s still basically a statue. What I’m saying is I’m not really into this figure. More precisely, I’m not really into the way McFarlane makes “action figures.” It’s like they forgot the “action” part. Still, that didn’t stop me from giving it away on the Joy Dunk Club!

If basketball’s not your sport, though, you can also pick up this exclusive Hines Ward figure as he appeared in 2012’s The Dark Knight Rises (also by McFarlane).

Your best bet would probably be the eBay route though since he’s pretty hard to find. I guess there are a lot of Steelers fans in Gotham.

So I just spent 150 words explaining what I dislike about McFarlane Toys’ approach to action figures, and what’s next on my list? That’s right, another McFarlane figure. Cognitive Dissonance, yo. (Also, I guess McFarlane just likes making action figures of Asian Americans.)

But look, there’s slim pickings when it comes to selecting action figures of Asian Americans, so what can you do. Seriously though, the promo pics of the first ever Steven Yuen figure are pretty dope. Sure, there have been other Glenn action figures before, but this is the first one to authentically capture the character as portrayed on the hit AMC series. And he’s pretty badass, what with the S.W.A.T. vest and walker-smashing gear. Besides, we love Steve Yuen here on the Nerds of Color!

I can’t front. I am an unabashed Smallville fan. And though the show’s fans are often considered the red-headed stepchildren of Superman fandom, its influence on live action superhero media — from Spider-Man 2 (arguably the best in the Raimi trilogy) to Arrow to Man of Steel — Smallville‘s shadow can be felt. I wished Zack Snyder and company took the Smallville homages already in that film one step further and cast an African American actor to play Pete Ross and an Asian American actress as young Lana Lang.

I admit, Lana wasn’t my favorite character on Smallville, but that had nothing to do with Kristin Kreuk. I think the writers just had a hard time figuring out what to do with her. (A problem Greg Pak does not have with Lana in his current run on Action Comics, by the way). To mark the show’s success, DC Direct released a couple series of figures based on the cast. Lana comes from the lesser of these two series, the first one, that was released during the first season — which explains the cheerleader outfit. Honestly, I forgot she was a cheerleader. Then again, she was only a cheerleader for, like, three episodes before she became the world’s youngest coffee shop owner (I guess Kansas doesn’t have any child labor laws).

The figure doesn’t have the greatest Kristin Kreuk likeness, but hey it comes with a wearable Kryptonite necklace. And pom poms! That’s something!

Also, if you took this figure and paired it with the Grace Park figure from my original list, you could reenact scenes from the classic Canadian teen soap Edgemont!

I didn’t love Iron Man 3. Though, it was a step up from Iron Man 2, but that’s damning it with faint praise. One aspect of IM3 that did entertain me, however, was how they handled the character of The Mandarin. All the reasons why The Mandarin is problematic is fodder for another post. But the twist that Marvel Studios gave him in this summer blockbuster was pretty genius, and in hindsight, totally telegraphed ever since Sir Ben Kingsley was announced for the role.

Anyway, Hasbro has significantly scaled back their six-inch Marvel Legends line of figures. They usually save that level of sculpting and articulation for special occasions (like blockbuster movie releases). The wave that was released in conjunction with the movie only had Tony Stark’s Mark 42 armor and Rhodey’s Iron Patriot suit in six-inch scale, but no big bad for them to fight. Hasbro has been teasing this version of the Mandarin as far back as Comic-Con — for release this fall — but I’m not sure if that schedule is still happening. If you must have a mini Sir Ben Kingsely in your collection, though, save that $17 you would’ve given Hasbro and put it towards the $200+ you’ll need to fork over to Sideshow Collectibles for this bad boy: 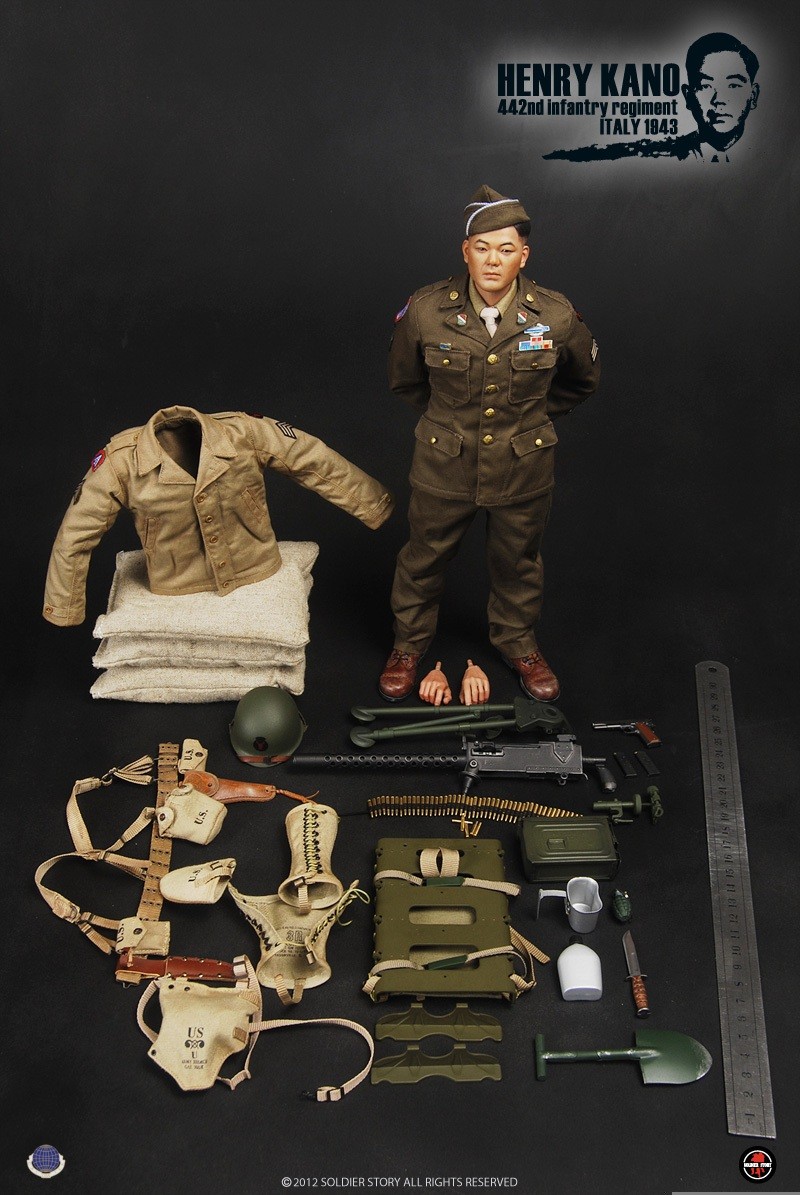 Soldier Story is a company specializing in intricately detailed military figures from World War II to the Modern era. Each amazing figure comes with tons of authentically scaled accessories and real-stitched clothing. One of their best offerings is this sixth-scale figure of Henry Kano, a real PFC and member of the famed Fighting 442nd, the all-nisei infantry unit that is the most decorated in the history of the U.S. Armed Forces. While this isn’t the first action figure to “go for broke” — Hasbro’s G.I. Joe Classics line released a generic “nisei soldier” several years ago — it’s by the far the best.

To learn more about Kano’s amazing history, read this account by his son.