The other day, the original Nerd of Color, Bao Phi, came by NOC HQ with a very big problem. His four-year-old daughter really needed a comic book, and apparently, it was the Nerds’ fault! Turns out, Uncle Rodrigo gave her a special mini-comic of IDW’s My Little Pony as a gift which quickly became a valuable artifact in the Phi house. Here, I’ll let Bao explain:

We’ve read it pretty much every single night at bedtime for the last few months. It’s gotten to the point where she can’t read yet, but she shout-reads almost the whole thing as we turn the pages for her. Here’s the rub: it ends with a cliffhanger, and my daughter really, really wants issue #2. However, I can’t find it. FOR THE LOVE OF NOC HELP ME!! 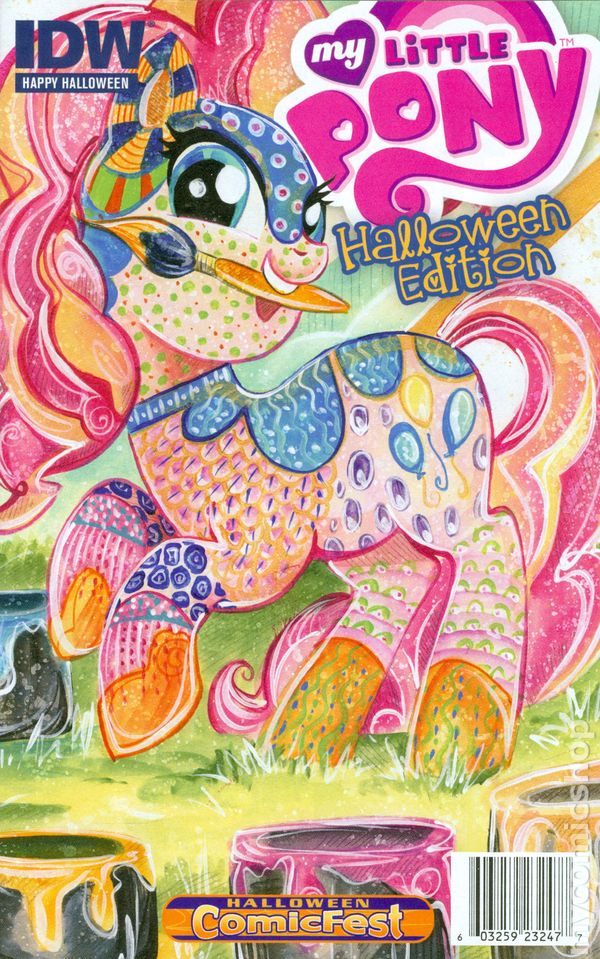 Turns out the mini-comic Rodrigo gave Bao’s daughter was the special Halloween ComicFest issue that came out last October (if you’re unfamiliar, ComicFest is just like Free Comic Book Day but in the fall). The comic in question was an excerpt from issue #1 of IDW’s MLP comics by Katie Cook, Andi Price, and Heather Breckel.

Fortunately, fellow NOC Will chimed in and pointed Bao to IDW’s first trade on Amazon. Volume One of My Little Pony: Friendship is Magic contains all four issues of the Queen Chrysalis story arc from which the Halloween issue was excerpted. Having read the first two volumes — multiple times — it’s safe to say that IDW’s MLP books are the most frequently read comics at my house. It’s no wonder why this is one of IDW’s most popular series. It also explodes the longstanding assumption that young girls don’t read comics.

While I wouldn’t go so far as to call myself a brony, I am the father of a six-year-old who is similarly obsessed with the ponies of Equestria. Thanks to Netflix, we’ve binged seasons 1-3 and the Equestria Girls movie at least half a dozen times and have a variety of the Mane Six in plastic and plush form. We’ve even downloaded unofficial versions of each season’s soundtracks and keep them on repeat on the iPod.

Some folk might give bronies and pegasisters sideways eyes, but I can definitely see the appeal of the show. The animation really is fantastic, the characters are memorable, and the storytelling is often very sophisticated. All that said, there is definitely a more critical lens that can be applied to viewing the ponies. And I hope the NOC can add to that discourse eventually, too.

Despite those interpretations, though, our family has bonded over My Little Pony: Friendship is Magic. It’s hard not to when the show and the songs and the toys and the comics are so present in our everyday life. For Christmas, I got my daughter The Elements of Harmony, a guidebook that’s designed to look like the same book Twilight Sparkle (her favorite pony, natch) finds in the series. It also serves as a character and episode guide, complete with behind-the-scenes info, song lyrics, and interviews. She’s read it cover to cover at least twice. Also, she’s six. And she probably knows the geopolitics of Equestria better than any of you.

It’s also interesting to see the genesis of my daughter’s fandom. She’s at the age where these stories and toys and cartoons are implanting themselves onto her brain much in the same way that G.I. Joe and Batman did for me at a similar age. I mean, if this blog is around 30 years from now, chances are My Little Pony will factor into my daughter’s NOC origin story.

And I can’t wait to read it!