I’m throwing a temper tantrum over this one. Christian Bale cannot play Moses. No. I know arguing against the whitewashing of a Biblical character is a lost cause, and wandering into any mainstream Christian church decked out with portraits of a blue-eyed Jesus Christ should indicate that the tide isn’t changing anytime soon, but I still find myself just a little more perturbed than average to see Batman play the savior of the Hebrews.

The memory of nerd anger from when Marvel announced that the new Spider-Man would be the half-Black, half-Latino Miles Morales is still fresh in my mind, and when Disney viewers, an increasingly adult fandom, criticized Brave for its lack of people of color, those in the opposition rushed to remind everyone that a movie that takes place in medieval Scotland shouldn’t have people of color anyway. Of course, Spider-Man is fictional and can be whatever race he’s drawn as, and the fact that according to the British National Archive, there were most certainly black people in medieval Scotland, did nothing to calm the nerves of white audiences faced with the outlandish suggestion that gasp perhaps there could be a character who wasn’t white.

Just a few weeks ago, Marvel announced that Captain America would become the next superhero to piss off white fans and become a black person. Commenters on the website threatened to burn their Captain America shirts and ragequit the Marvel fandom. One even said that Marvel was ruining his favorite superhero. Another said that Captain America should always be white because he’s an ICON (sic). White audiences have grown increasingly critical of what they view as “politically correct” culture, in which people of color are being thrown into roles that are historically white simply to please some unspoken rule of diversity.

These commenters, wherever they may pop up on the internet, typically try to phrase their racism in an objective way. They claim that their outrage isn’t because the new character is black, but because the change alters canon, or is historically inaccurate, or is done only for financial reasons. “What if Black Panther became white?” fans often ask, suggesting that the same kind of backlash would be warranted for if the inverse example ever occurred. 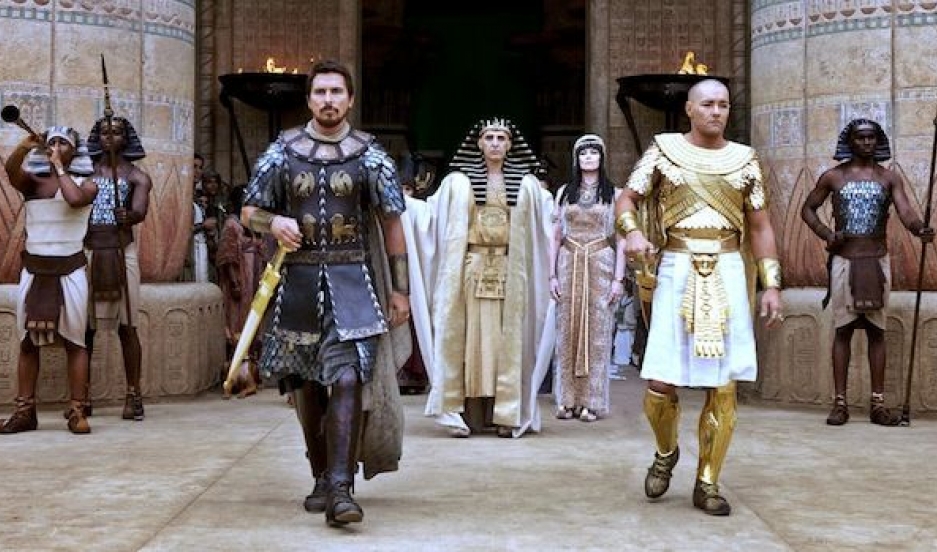 And here we have Exodus: Gods and Kings, a movie starring a white guy playing Moses. Moses is a Hebrew born in Africa to an Israeli mother but raised by an Egyptian family. Christian Bale playing Moses is a change of canon. It is historically inaccurate. It is done for financial reasons, because Christian Bale is a box office draw. It certainly looks like Exodus fulfills all the checkboxes white fans find so offensive when a black character happens to wander into their line of sight. Yet, there’s so far been nothing but silence from white audiences about the upcoming Christmas blockbuster. Why isn’t anyone threatening to burn their Moses shirts and convert to Buddhism?

What white audiences don’t seem to understand is that there is a difference between whitewashing and racebending. Captain America vs. Moses serves as a clear cut microcosm of that difference, and as a fantastic movie someone should consider writing.

When traditionally white characters are racebent, it provides increased visibility for people of color to audiences who clearly are not used to seeing characters who aren’t white. If one were to give these fans the benefit of the doubt, it could be said that if non-white characters weren’t so absent in the first place, fans wouldn’t be so flabbergasted to see their favorites switch race. Racebending in this direction is part of the continued effort to change the perception black characters and black audiences have in the entertainment industry. Blackness is viewed as a niche market confined to one buddy comedy a year, one Oscar-bait film about our suffering, and whatever action movie The Rock gets paid $50 million dollars to do — and if Dwayne’s skin was a few shades darker, we wouldn’t even have that. This kind of racebending helps to break that highly racialized film standard.

Whitewashing, on the contrary, serves no forward purpose whatsoever. Hollywood filmmakers who whitewash seem content to continue the tired trend of viewing the words “mainstream” and “white” as synonyms. Black audiences are expected to watch films with no black people. Asian American comic book fans are expected to read comics with no Asian Americans. Latinas are expected to watch television shows with no Latinas. But white audiences are never asked to do the same. The closest thing they get are the aforementioned Oscar-gobbling films about black people suffering, such as the admittedly brilliant 12 Years A Slave. It’s more than a little sobering to realize that the only time white audiences are asked to endure colored folk is when they get to watch us be whipped and chained for two hours.

Hollywood will completely alter characters like Moses and the Egyptians to ensure that the mass appeal (read: white appeal) of a film is not damaged, and that’s the importance of the difference between racebending and whitewashing: racebending attempts to dismantle racist assumptions about which audiences are considered mainstream, whereas whitewashing perpetuates the notion that only white viewers are real viewers.

Come December, I probably won’t go see Exodus, but I will find a bootleg of it online and watch with morbid curiosity as a white Egyptian Hebrew falls in love with a white Sub-Saharan African woman to lead the white slaves out of the hands of their captors, who according to promotional stills, look pretty dark-skinned. I won’t do this because I want to. I have no interest in seeing a film that should logically have an all-POC cast get all the good guys whitewashed while all the bad guys magically keep all their melanin.

I will watch it as one might watch a wedding between a couple that hates each other, wondering how this thing ever got put together, why no one stopped it, and waiting for somebody, anybody, to speak up about how wrong the whole thing is.

Dion Beary is a North Carolina-based pop culture essayist and blogger who has been featured as a guest on Grantland’s podcast network and whose writing has been published in outlets such as Yahoo.com, The Atlantic, and Thought Catalog. He can be found on twitter @hashtagdion.