About a week and a half ago, Marvel Studios (owned by Disney) and DC Entertainment (owned by Warner Brothers) got into a bit of a pissing contest. Marvel struck first by announcing Robert Downey Jr. would be bringing Iron Man to the Captain America sequel, setting up a “Civil War” story line in the Marvel Cinematic Universe and making it the highest profile superhero vs. superhero showdown of 2016 (sorry, Batman v Superman).

The next day, Warner Brothers unveiled its long-gestating slate of DC Comics-based films that was supposed to satiate fanboys’ appetites through 2020. While a lot of folks found some of the choices in Warner’s ambitious schedule confounding — including yours truly — the one area where DC had a leg up on Marvel was in the diversity of its lineup. In addition to the inclusion of solo movies for Wonder Woman (finally!) and Cyborg (huh?), you also had people of color top-lining two more films — Jason Momoa in Aquaman and Dwayne Johnson in Shazam. As groundbreaking as the Marvel Cinematic Universe is, it’s also overwhelmingly white and male. At least until today.

Okay, so it’s still overwhelmingly white and male, but after today’s special press conference at the El Capitan Theater in Hollywood you can now add Black Panther and Captain Marvel to the list of super flicks coming down the pike. Remember, today was supposed to be the day Marvel unveiled the first teaser for Age of Ultron, but since it got leaked last week, the studio had to improvise by ANNOUNCING ALL OF THE THINGS.

The headlines, of course, belong to Black Panther, which is currently slotted for the November 2017 release date. This is the one superhero movie that nerds of color have been clamoring for the most. It’s also being positioned as the lead-in to the third Avengers movie (which is being split into two parts because it’s going to be the Infinity War) and will be facing off against Warner/DC’s Justice League. It’s also the only one of the new announcements that already has its star, and it’s an actor that’s been associated with the role for a long time now. 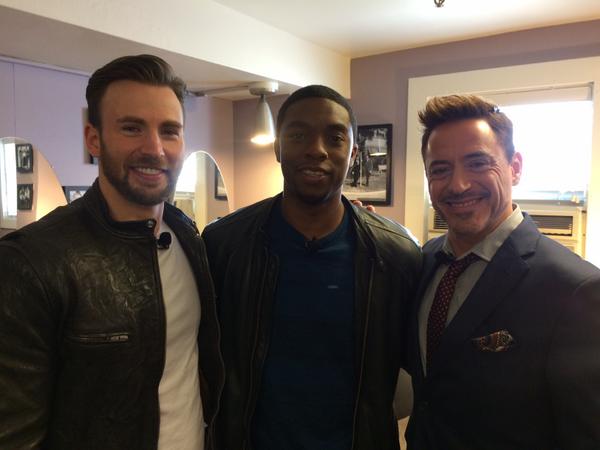 Chadwick Boseman, best known for playing the icons since he’s already portrayed Jackie Robinson (42) and James Brown (Get on Up), joined Kevin Feige, Chris Evans, and Robert Downey Jr. on stage this morning to be welcomed into the family.

And if Captain America 3 wasn’t already hotly anticipated, it was also announced that Boseman would be making his MCU debut a year earlier than expected since he’ll be playing a substantial role in the threequel — which is now officially titled Captain America: Civil War. On top of that news, they also revealed concept art for what T’Challa will look like on screen!

Needless to say, the fact that we now have official confirmation that Black Panther is finally part of the Marvel Cinematic Universe is a game changer. Putting T’Challa in Cap 3, setting it up as the penultimate film of Phase 3, and pitting it against Justice League prove that Marvel is not only committed to the character, they’re making Black Panther a foundational element of their cinematic universe. Now, all we have to do is hope they don’t screw it up. Just in case, our own Shawn Taylor offered up some tips on how to make sure it won’t suck last year.

Believe it or not, Black Panther wasn’t the only earthquake-inducing news to come out of the El Capitan today. As previously stated, Marvel has filled in the blanks of their upcoming movie slate. So everyone is going to have to revise their infographics because Warner, Sony, and Fox are no longer going up against of “Unknown Marvel” movies from Disney. Marvel Studios announced the following films and their respective release dates:

Yes, there’s actually going to be a Doctor Strange1 and an Inhumans movie. While there have long been rumors of a solo Black Widow movie in development, the first Marvel film to feature a female hero front and center will be Captain Marvel in 20182. Though no actress was attached at the time of the announcement, the fact that Marvel is putting all of their chips in Carol Danver’s basket is an encouraging sign.

So once again, Marvel Studios has rocked the internet with its slate of upcoming superhero flicks. Ball’s in your court, DC.