Over the weekend, The Hollywood Reporter revealed that Marvel Studios had not yet cast the role of Peter Parker — who is either going to have a cameo or a pivotal role in next summer’s Captain America: Civil War before launching into his own franchise within the Marvel Cinematic Universe. Back in April, news sites were reporting Ender’s Game star Asa Butterfield was the frontrunner for the role, but Marvel is still screen testing several young actors.

One young actor who isn’t being tested — but should — is Ryan Potter who is best known as the voice of Hiro Hamada in Disney’s Big Hero 6. And I’m not the only person who thinks so!

Hey @Disney @Marvel here's my professional head shot. I mean. I get the job right? http://t.co/VavC7AmyHu

A week after Marvel and Sony leaked the names of the (all-white) teen actors who were being considered for the role of Spider-Man, Potter took to twitter to openly campaign for the role. Tongue-in-cheek or not, it’s hard to deny that casting the 19-year old would be a big deal. Besides, compared to the other actors in the mix, Potter has the best superhero bona fides since he’s already part of the extended Marvel/Disney family through his work on Big Hero 6. Plus, he’s the right age and has the martial arts/stunt work experience from his years on Nickelodeon’s Supah Ninjas. What more could you ask for?

Sure, as a mixed-race Asian American, Potter doesn’t quite look like the others competing for the job, but that should be an advantage. In fact, that’s the point. Comics artist Alice Meichi Li already convincingly laid out the reasons why an Asian American Peter Park(er) actually makes more sense as a superhero from the Queens, NY of the in 21st century, so why not at least consider Potter for the gig? It’s not like the MCU already has an overabundance of Asian American heroes in the first place.

So, let’s hope Marvel and/or Disney has already got him on a one-way ticket to Atlanta to participate in the screen tests happening now. At the very least, it will go a long way towards making amends for Marvel’s other casting fails. 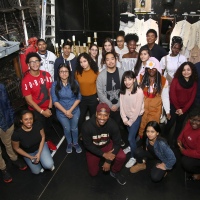