Over the weekend, Anaheim, CA was ground zero for the geek-o-sphere as pop culture junkies joined the throngs of Disneyphiles to experience the wonder that is D23 Expo. Now that the House of Mouse owns everyone’s fandoms, D23 rivals only San Diego Comic-Con in terms of hype-building. And this year’s Expo did not disappoint. In addition to teasing footage from Marvel Studios’ and Pixar’s 2016 (and beyond) slate of movies, the announcements that got our attention here at NOC HQ came from Lucasfilm on Saturday.

Considering Star Wars had already knocked our socks off during Celebration and Comic-Con, I didn’t think they could do it all over again a third time this summer? Well, clearly I underestimated the power of the Force.

Sure, Lucasfilm announced Jurassic World’s Colin Trevorrow would be helming Episode IX into billion dollar territory. Also, Disney Parks revealed two 14-acre expansions to both Disney World in Orlando and Disney Land in California to feature Star Wars-themed Lands (holy shit). But the thing that got my attention? The full cast was announced for the first standalone Anthology film, and wow. People of color actually exist in Star Wars!

Ever since the film was announced, we knew that it would be the first Star Wars film led by a female protagonist in Oscar-nominated Felicity Jones. What we didn’t know was that the film was going to surround her with so many actors of color! In addition to the actors shown in the official photo above — including Riz Ahmed, Diego Luna, Jiang Wen, and Donnie Yen — Rogue One will also feature Oscar winner Forrest Whitaker, Firefly’s Alan Tudyk, Hannibal’s Mads Mikkelsen, and The Dark Knight Rises’ Ben Mendehlson.

Considering that for 35 years and six movies, Lando Calrissian, Mace Windu, and Bail Organa were basically the only brown people in Star Wars, Rogue One looks like it’s going to triple the number of POCs in that galaxy far, far away in one fell swoop. (Also, Asians finally exist in Star Wars. Now to find a role for Ming-Na…)

“Rogue One takes place before the events of Star Wars: A New Hope and will be a departure from the saga films but have elements that are familiar to the Star Wars universe,” said Lucasfilm president Kathleen Kennedy in a press release. “It goes into new territory, exploring the galactic struggle from a ground-war perspective while maintaining that essential Star Wars feel that fans have come to know. Gareth is such an innovative director and I’m so excited to be working with him and the extraordinary ensemble cast he’s selected for Rogue One.”

If that weren’t enough, Lucasfilm distributed exclusive Drew Struzan-illustrated posters for The Force Awakens. And it’s pretty spoiler-heavy. If you don’t want to know anything else about the movie, I’d suggest to click out of the article now.

Still here? Well, those Drew Struzan posters were not only a throwback to the old school Star Wars one-sheets, they feature what seems to be a pretty big plot point for one of the film’s main heroes Finn, played by John Boyega. 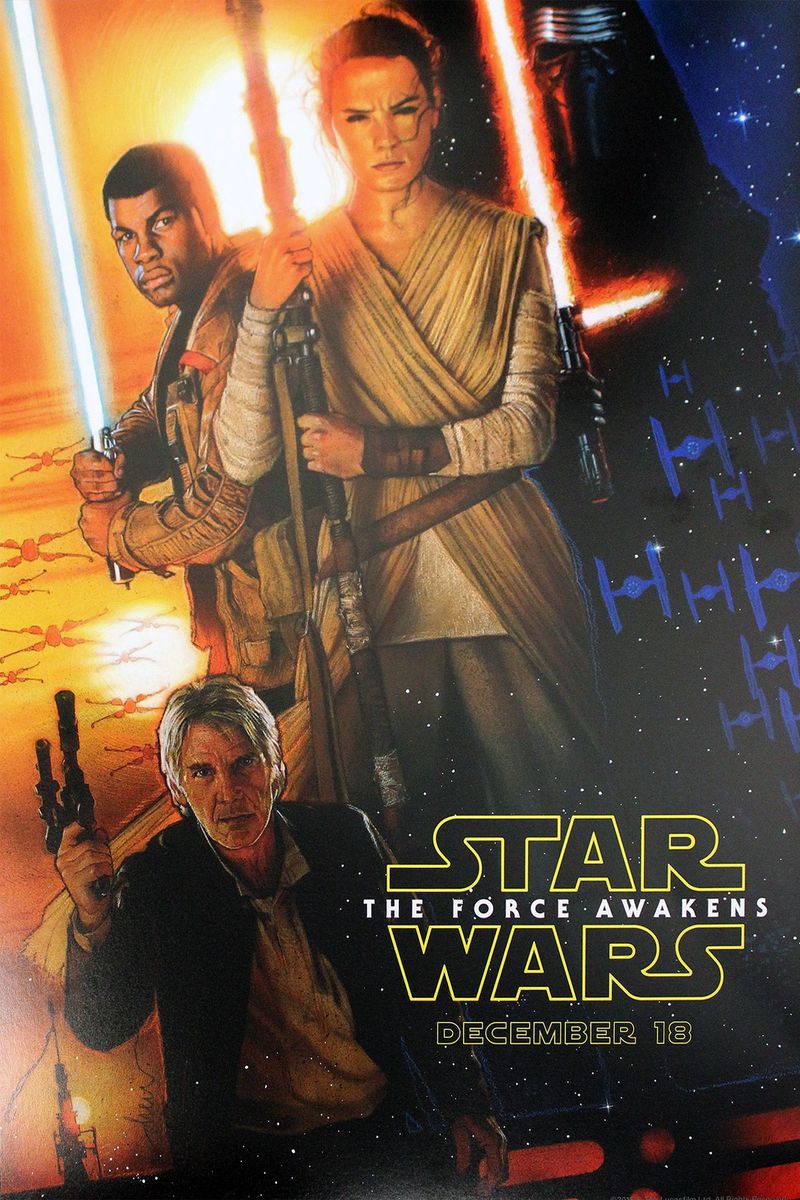 That’s right. Finn’s got a lightsaber (maybe Luke’s or Obi-Wan’s?) Take that, fanboys.