Star Wars: The Force Awakens is a juggernaut. Critically acclaimed and the current holder of the title of “biggest film opening of all time.” It’s an engaging film that engrosses the viewer and harkens back to the early days of franchise. As it is with all things pop culture, particularly in the age of internet piety, the film also has its detractors. The complaints range across the spectrum but one of the most pointed complaints have been towards Finn, the character portrayed by British actor John Boyega. Two writers whom I’m good friends with — Hannibal Tabu and Joe Illidge — have both written pieces complaining about the character for similar reasons, calling him inept, and even neutered.

I love you guys, you know I do, but I couldn’t disagree with you more. Now this is going to be a rather spoiler filled piece, so if you haven’t seen the movie, now’s your time to hit the eject button and go look at Buzzfeed.

Hannibal in particular said: “You literally were good for nothing. Failed janitor, sent to fight. Failed fighter, ran away … why exactly? What prompted your crisis of conscience? Script doesn’t care, so why should I?”

Finn — or as we’re introduced to him in the opening scene of the film by his identification number FN-2187 — was raised to be a Stormtrooper. During a village raid on the desert planet of Jakku, Finn has a crisis of conscience and refuses to fire on a group of captured prisoners. Deciding that he had to leave The First Order but needing a pilot, he decides to free captured resistance fighter Poe Dameron. There’s an instant rapport between the two as they make their escape and Poe gives him his new moniker while they’re escaping.

Finn is a character without an identity when we first meet him. One of the many faceless drones amongst The First Order, Finn is the first Stormtrooper we ever see remove his helmet in any of the films. We’re witnessing a birth in a way. All he wants to do is get away from the people who have oppressed him, as far as possible and never return. He’s never known a life outside of being a Stormtrooper, the mission on Jakku possibly being the first time he’s seen actual combat. What he saw shocked him so much, it shook his programming and for the first time, he saw things for what they truly were. That was the first step into a larger world, to coin an appropriate phrase.

Many of the complaints about Finn seem to stem from people who were disappointed that he seemed to be useless in their eyes. Much of it, I suspect is based on the speculation leading up to his role in the overall narrative. We’d seen so many images before the movie hit theaters of Finn wielding Anakin Skywalker’s original blue lightsaber, there was a natural assumption that he would turn out to be the spiritual successor to Luke Skywalker. However, we didn’t get that since that role was to go to Daisy Ridgley’s Rey. No, with Finn we got the successor to another popular Star Wars icon, Han Solo.

Like Han, Finn is our everyman. He is the entry point hero we follow through the story. Like Han, Finn is normal. He’s not royalty, nor a superpowered force wielder. In fact, until being handed a lightsaber by Maz Kanata, he’d never even seen one outside of Kylo Ren’s. He’s a guy, trying to escape his past, who keeps being drawn back to doing the right thing. He fights his fears to save Poe, then later Rey.

People forget that Han Solo spent the majority of both Star Wars and The Empire Strikes Back trying to leave the Rebellion. Han wasn’t a hero, he didn’t want to go on the Death Star to rescue Leia until the promise of a reward was placed in front of him. He was ready to leave before the Battle of Yavin but came back because he knew it was the right thing to do. In spite of that, he fell into the role of leader, not out of duty, but love. Love for Leia and Luke, yet even in the beginning of Empire, he was still planning on leaving since the bounty on his head was so high there was nowhere for him to hide. Han wasn’t a particularly great shot, or an expert pilot. He had the fastest ship, only by default. He wasn’t naturally brave, and was captured by the Empire, frozen in carbonite, and mounted on Jabba’s wall. The thing that made Han popular was his everyman quality. He was the one character in the original trilogy who was the skeptic. He didn’t believe in The Force, calling it simple tricks and nonsense. Like Finn, Han fought his instinct to run to do the right thing.

As we get to know Finn, we discover who he was. He was a nameless drone who worked in sanitation. Funny, charismatic in his way and much to his surprise, brave. What makes Finn work for me as a character is that in spite of the fact that he’s not the Super-Negro a lot of potential viewers were hoping for; instead, Finn ends up being the hero. When Rey is down, he steps forward, lightsaber in hand to take on Kylo Ren. The Resistance is only able to take down Starkiller Base because Finn knows his way around, providing them with the critical information to not only get past their shields but to destroy the reactor.

There’s a quote that I like: “Being brave doesn’t mean you are not scared. It means you are scared but you do what has to be done anyways.” 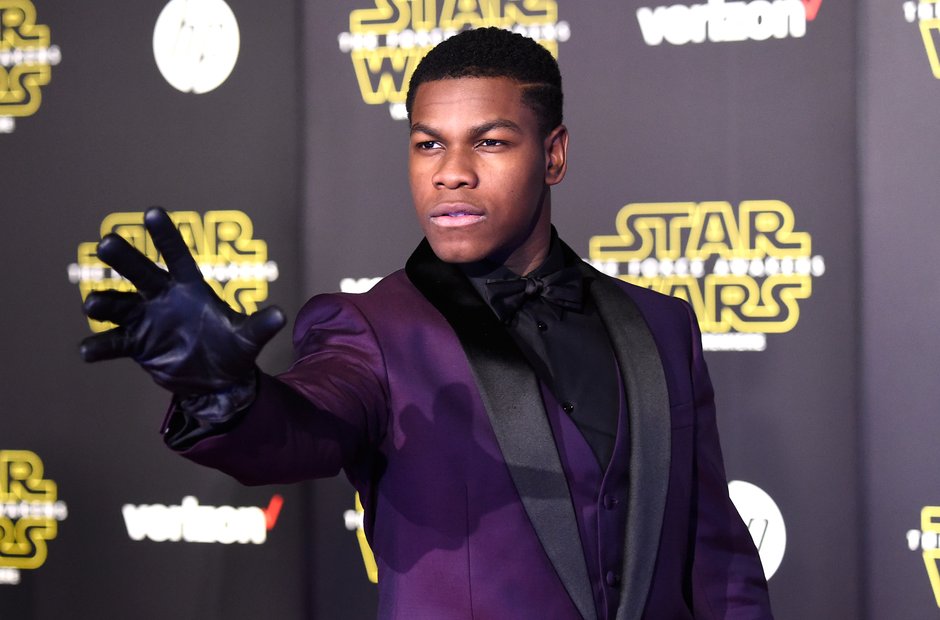 That is what makes Finn work for me. It helps that John Boyega is, like Harrison Ford before him, incredibly engaging and affable in the role. I look forward to seeing his character grow over the series, to embrace his role in the story no matter how it shakes out.

Jamal Igle is a comic book artist, editor, art director, marketing director, and animation storyboard artist. He is the creator of Molly Danger, published by Action Lab Entertainment, and is also known for his penciling, inking, and coloring work on books such as Supergirl and Firestorm for DC Comics.