We all know that DC’s television universe is a force to be reckoned with. Hell, the Berlanti-verse alone is already four shows deep across two networks, with each show — even Supergirl — all but guaranteed to return next season. Now that the DC Universe is firmly entrenched on the small screen, I think they should continue the pattern of spinning off characters into their own series. In fact, DC should look to spinning off no less than three shows next year: the obvious ones being Martian Manhunter and Vixen, but I want to make the case for another team show: Birds of Prey featuring the female heroes from the Arrow-verse. 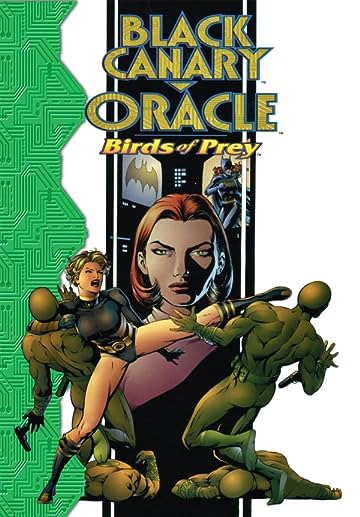 Before I continue, a little context first. Birds of Prey was a comic series from the mid-’90s created by Chuck Dixon and Jordan Gorfinkel (when the team originally appeared in an issue of Showcase). The original conceit featured the team-up of Oracle (a post-Killing Joke Barbara Gordon) and Black Canary, aka Dinah Lance. Though it was only meant to be a series of limited one-shots, the comic was so popular that DC eventually turned it into an ongoing series in the late ’90s.

While Dixon’s run featured some of the most iconic BoP stories — including my personal favorite: issue #8 when Barbara and Dick Grayson go on a “date” — the book really took off in the early 2000s when Gail Simone took over the series. Simone added Huntress to the team, and the Birds of Prey became the trio that is most associated with the name: Oracle, Black Canary, and the Huntress.

This iteration of the team was featured in a short-lived live action series on The WB. Starring Ashley Scott as the Huntress, Dina Meyer as Oracle, and Rachel Skarsten as Black Canary, the show was unable to match the success of WB’s other superhero series Smallville, and was canceled after one season. Though it wasn’t a hit while on the air, the show has developed a small cult following after being released on home video.

This version of the Birds differed a bit from its comic counterpart. Though Oracle was still a wheelchair-using Barbara Gordon, the producers went with a different incarnation of Huntress. Instead of the mob-hunting vigilante known as Helena Bertinelli — her modern interpretation — the TV Birds of Prey went with a version of the character from the 1970s, when she was the daughter of Bruce Wayne and Selina Kyle. Still never explained why the daughter of Catwoman and Batman would have superpowers, though. The show’s version of Dinah was also quite different from the Canary we know. Their Dinah was an orphan with telepathic abilities instead of a sonic cry. Though late in the season, the show introduced her birth mother Carolyn (played by Full House’s Lori Loughlin) as the original Black Canary.

Birds of Prey went off the air in 2003. DC also stopped publishing BoP books in 2014. Despite those setbacks, I believe the time is right to resuscitate the property for live action. For one, Birds of Prey is still considered one of the most successful comic properties to feature women heroes. Secondly, its original core members — Barbara, Dina, and Helena — are still popular characters. Black Canary, in particular, has been more prominent in the last few years — thanks to Young Justice and Arrow on television; not to mention as the star of one of the best books in the DC You relaunch — than at any point in the character’s past.

I want to dive a little bit into that last point about Black Canary. Now, I know I’m going to get reamed for this on twitter — the last time I had something nice to say about the character on Arrow, I got flooded with comments from angry fans who really dislike Laurel. It’s no secret Laurel is not a popular character with a large contingent of Arrow fans — even on this site. The phrase “Wack Canary” always seems to show up on my timeline when watching Arrow. But I have to admit: I never understood the hate she generates in fandom. Full disclosure, I wasn’t the biggest fan of Lauel’s in early seasons of Arrow, but to be fair, I wasn’t that big a fan of the show in general that first season either.

Over the years, though, I’ve appreciated the growth they’ve afforded her character — from spurned lover to recovering alcoholic to grieving sister to full-fledged member of Team Arrow — and while the character has demonstrated several flaws over the seasons, those flaws are the reason I find her so interesting. That said, admitting you like Laurel in public can get you flamed from all sides. That’s one of the byproducts of fandom nowadays: people claim a favorite and then demonize the other side. It’s not unlike sports or politics. Personally, I’m too old to care about the love lives of fictional characters (except Clark and Lois on Smallville, they’ll always be my favorite) so I don’t really care if Laurel isn’t the love interest on Arrow anymore. But the fact that she may be (spoiler) killed off in the season four finale is a cop out at worst and disappointing at least.

Instead of killing off Laurel because the writers can’t figure out what to do with the character outside of a romantic relationship with the hero, they should move her on to a Birds of Prey series instead. In other words, they can still write her off Arrow, but I think this version of the character deserves to continue. And a live action Birds of Prey reboot is the perfect vehicle.

This is how I’d do it (if they are actually killing Laurel on Arrow). Perhaps Laurel fakes her death in the finale (why, I don’t know since I’ve yet to see the episodes that lead up to the end) and takes up residence in Gotham City where she goes by her given first name, Dinah. There she encounters a familiar face: Helena Bertinelli. The two engage in some hand-to-hand combat — remember, the last time these two met Laurel was Helena’s hostage — before Huntress breaks off the fight to apprehend the crooks she was stalking. Laurel observes that Helena is talking to someone in her ear the whole time. Eventually, Helena tells Laurel that she is no longer using deadly force and that she has come under the tutelage of someone called “The Oracle.” We learn that Oracle came to Helena while she was in prison and agreed to help train her if she came to Gotham. Later, Helena takes Laurel to a watchtower and we meet the mysterious Oracle who is a woman in a wheelchair surrounded by sophisticated computer equipment. And thus, the Birds of Prey are born.

Who would I get to play Oracle? I originally considered Allison Mack, who famously played Chloe on Smallville and is essentially the proto-Felicity. But I thought having a character like Oracle should be an opportunity to cast an actual actor with a disability. So my pick for Barbara Gordon ended up going to Angela Rockwood. Known for small roles in The Fast and the Furious and V.I.P. and being married to 21 Jump Street’s Dustin Nguyen, Rockwood was paralyzed in a 2001 car accident. Since then, she has become an advocate for people with disabilities and can currently be seen on the Sundance TV reality series Push Girls. Also, the fact that she is mixed race Asian American doesn’t hurt either!

At the very least, could we get some animated webisodes a la Vixen? DeviantArt’s AMTModollas shows us what it might look like:

Of course, my preference would be a live action show. I’d like to think a Birds of Prey series could echo the later runs of the comics and feature a rotating door of guest appearances by other female heroes in the Berlanti-verse, like Hawkgirl, Katana, Vixen, or even Supergirl. Of course, I would love if Gail Simone could be involved with the writing staff somehow. I mean, she tweeted this recently:

I hope I get to show off my ARROW expertise!

And of course, who better than Lexi Alexander to direct the pilot?!

So what are we waiting for? Let’s make this happen. TV could use more women heroes!