I wasn’t gonna do this, but in a conversation on twitter, @BlackGirlNerds asked me to expand on what I recently called “Daredevil‘s White Virgin/Whore of Color Complex” and I would hate to disappoint. Don’t get me wrong: I’m not just trying to dump on Daredevs. I still love the first season, and the second season, despite serious problems, is still great television in a lot of ways.

But I hope — on this site especially — I don’t need to go over again why/how problematic representations of POC and women spread like mayonnaise over a beloved television property can be like an all-day, all-you-can-take, face-slapping machine. And Arthur Chu has already shown you the wasabi-infused mayo currently salmonellizing on Daredevil‘s bread.

I’m here to show you the ketchup.

For those of you who don’t know, the “Virgin/Whore Complex” arises out of Freudian psychology, where it is known as the “Madonna/Whore Complex” and describes a particular mindset in some men unable to maintain sexual arousal inside of marriage (or, today, a committed relationship). The woman they respect and desire as a life partner is for that very reason not sexually attractive, and the woman who is sexually attractive is for that very reason not worthy of respect or dedication. The idea that this mindset is a product of a patriarchal culture is a mainstay of feminist theory.

At the same time, our American culture has a long history of sexualizing women of color and holding up white women as paragons of sexual purity. Women of color are lower than pure-minded white women: spicy, sexually imaginative, animalistic. Although it’s natural to desire the superior white woman sexually, only white men are good enough for her, and they must spend their manhood proving their worth. This mindset lingers in our collective unconscious and is expressed in myriad ways. It gets a lot more nuanced than that, so I’d encourage those of you who haven’t to read up on this.

As you can see, there are sexual dichotomies set up here which which you can overlay upon one another, making one, big kyriarchal lasagna. The hypersexualized dark women are nature’s chaos-loving whores, and the lovely white women were designed by God to morph smoothly from girl-next-door to wife-and-mom. I’m calling it the White Virgin/Whore of Color Complex, and, though I’ve never heard a term like this before (as far as I can remember), I’d be shocked (shocked!) if you couldn’t find it spoken of all over the internet, especially in these intersectional days. (Post links below if you’ve got ’em).

With Daredevil/Matt Murdock as the stand-in for white men everywhere, you can see this dynamic woven throughout Daredevil‘s second season.

Karen Page, a radiant blonde, is Nelson & Murdock’s assistant (i.e., helpmeet) who, it is suggested, could become a partner someday if she wanted it. She is of the daytime: the workday, the work, the vocation, the mission. She is deeply empathetic to the underdog; she is the heart of Nelson & Murdock, and literally keeps the light shining in the offices at night. She is therefore present at night, but only either as someone to be protected, or as part of a ritual of decompression/relaxation from the labors of the day.

Karen represents the light: not just the light of day, but also daylight/sunshine as a metaphor for public openness and accountability. As a researcher/investigator for both a law firm and a newspaper — eventually to jump to full-time journalist — Karen figuratively lets the light in on the dark secrets of Daredevil’s Hell’s Kitchen. She is also the light of human goodness. Her courage is held up by a sense of righteousness (or Spunky Agency, depending.) She is the avatar of truth, justice, the simple, the everyday, the ordinary — real human life.

Elektra Natchios, candle-light tawny, black-eyed, -tressed, and -dressed, is the eternal one-that-got-away. She is everything dark: nighttime, secrets, criminality, glamor, sex, hiding (information and identities). She has a mission as well, a secret, magic mission that requires her to kill a lot of people. Even her legal daytime activities are just a cover for this secret mission — not all of whose important details have been revealed, even after two seasons. She doesn’t have, or require, courage, because she’s motivated by an inherent desire and talent for violence.

And, in this version, she’s not “Greek,” casting back to the Freudian roots of her name and backstory, but rather a mysterious adoptee, whose role as the leader of a secret Japanese ninja org hints at oriental origins — and I use that word advisedly. The casting of a mixed-race Asian, Elodie Yung, makes this resoundingly clear.

Elektra literally comes in the darkness and even turns out the lights when they’re on. She’s slippery, won’t be pinned down, and only comes back after Matt has a chance at a “healthy” relationship with Karen, to pull him away from her light. There’s absolutely zero subtlety about Elektra representing Matt’s worst, most violent, mayhem-loving impulses, and Karen representing his best, law-abiding, mind-over-matter wishes. Matt courts Karen, wants to be worthy of her, but he can’t stay away from Elektra.

Now you might say that this dichotomy is baked into the Elektra character by infamous misogynst Frank Miller, and poor Karen was necessarily warped in her wake. And you’d not be wrong. You might say that they were taking Karen in a different direction in the first season, and you’d not be entirely wrong about that, either. But if you give it a gimlet eye, you’ll see that Season One also had a budding romance triangle that more than hinted at this dynamic.

I’m talking, of course, about Matt/Karen vs. Matt/Claire. Now Claire Temple, played by Rosario Dawson as an Afro-Latina, is not an avatar of violence or dark impulses — quite the opposite. But she is definitely of the nighttime and of the darkness. She’s a nurse who seems to always catch the night shift, or to be awake at night when Matt needs her. She exists to heal the effects of darkness and violence, and we only see her tending to men who are the victims of violence.

Claire is the first person to share and keep Matt’s Daredevil secret. It’s true that her depiction — and Karen’s first season — were more complex. Karen is naive and hopeful where Claire is experienced and jaded, and yet, Claire is the one who rejects Matt’s dark side, Karen the one who embraces Daredevil, even not knowing who he is. But we still have two women divided by light and darkness of skin, of work, and of symbolism.

And Claire is a mashup of two comics characters: Luke Cage’s Dr. Claire Temple and Daredevil’s The Night Nurse.

So I rather think that the White Virgin/Whore of Color Complex is baked into Daredevil as well, and not because of Frank Miller. They could have easily racebent Karen and made a woman of color the avatar of light. Since the Night Nurse was originally white, they could have kept her that way and made the avatar of darkness a white woman. For that matter, they could have kept Elektra a light-haired Greek woman, like she was in that awful movie. There was no reason at all to make the evil one a woman of color. Well, no good reason.

And, perhaps less easily, they could have written the entire second season better. They were hinting at a dark side for Karen: where did that go? Since they made over Elektra’s origin story, why did Elektra have to be such a straight-up stereotype? Instead of her pulling Matt to the dark side, couldn’t he — in their earlier relationship — have pulled her towards the light? Or couldn’t their entirely made up “Black Sky” (whatever TF that is; it’s still unclear) not be a being of pure evil but rather a person, of no particular moral hue, with a great potential for power?

The one thing that is clear to me is that Daredevil is not kicking over the racist/sexist traces of its source material. No, it’s pulling its white man’s burden like a good little pony. Because to subvert dominant paradigms, you have to 1) be aware of them and 2) try.

I’m starting to think that the show with the glow is gonna turn out to be just another disappointment. I just looked and realized that I’m not actually excited about season three. That’s a bad sign.

And then there’s this:

FOUR episodes in and Claire was facing consequences for helping #Daredevil. Karen Page flies by with her long blonde hair in the breeze. 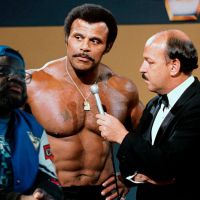 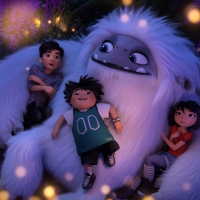 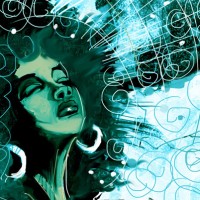