“The Runaway Dinosaur” is a children’s book that our Flash’s mom used to read to him when he was younger about a lost dinosaur. Our Barry-saur is also lost, but in a place we’ve only been in passing: in the Speed Force. I think. What kind of noun is the Speed Force, anyways? Only Kevin Smith, the director of this episode, knows.

It’s been literal seconds since Barry disappeared in a flash of light, leaving behind a distraught team. Cisco runs in from the roof like, “I WAS GONE FOR TWO MINUTES…” Talk about character development: Cisco didn’t even blink at the remaining tatters of Barry’s costume.

Things are looking bleak. Barry’s dad, Henry Allen, sits in shock. Harry Wells gives the ‘all clear’ to Jesse and Wally where he thinks they are safely waiting in the Room of Requirement, unaware that they broke out just as the particle accelerator went off. The two dads, Harry and Joe, run and slide to find their unconscious, young bodies. Damn, it is not a good day to be the father of a speedster.

Wally immediately wakes up and politely asks Iris and Joe to stop yelling, but Jesse remains unconscious. Iris suggests that Dr. Henry Allen take a look at her because she may be in a coma like Barry was when he was originally struck by lightning.

Cisco sadly inspects the torn leftovers of the red suit and vibes a vision of Barry. He’s alive and somewhere confusing.

I'm glad Team Flash learned that Barry is alive or else we'd have a really effing depressing episode. Thanks, Vibe. #TheFlash #DatFlash

Barry wakes up “in his childhood bedroom” and finds “Detective Joe West” downstairs cleaning up a “crime scene.”

I knew that the #Speedforce would look like either #JesseLMartin or Morgan Freeman. #TheFlash #DatFlash

“When the first subatomic particle sprang forth from the Big Bang to form reality as you know it, we were there. When the last proton decays, stops vibrating, and plunges the universe into heat death, we’ll be there too. –The Speed Force

“We” is the Speed Force. Barry is mind-blowingly talk to the Speed Force like he’s talking to gravity or light. It’s weird. But okay. I don’t get it, but I accept it. Barry also accepts it, and asks to go back to save his friends from Zoom. Thank God, Barry still has his eyes on the prize. Force!Joe tells him that he won’t be able to return home until he catches a superspeeding shadow that is also the Speed Force? I don’t know anything.

In S.T.A.R. Labs, everyone is asked to rise to the occasion and perform their jobs despite the high stress and anguish levels: Dr. Allen is in charge of medical, Cisco is trying to vibe and find Barry, Harry must figure out how to get Barry out of the Speed Force, Joe is keeping the peace, and Iris retrieving Thawne-Wells scientific files from the lab’s morgue. Because they have a morgue(ish) of metahumans. Where the evil Thawne-Wells dissected and took some notes. This should’ve been a red flag, but Cisco claims, “it was a crazy time” and they  “had a lot going on.”

@TheNerdsofColor Hopefully they don't get too emotionally fulfilled, I'd hate to see either one summarily killed off.

The crazy times never stop, Cisco, because at that moment, Zombie!Girder (from season one, episode six) comes bursting through the morgue-ish door. A zombie, foreal? Irisco cannot believe this is happening. We can’t either, Irisco.

CISCO: Get behind me!
IRIS: NAHHH YOU GET BEHIND ME! #TheFlash #DatFlash

Barry, still in Speed Force Land, comes across Force!Iris in the place where they had their first kiss Sit, Barry, sit. The Speed Force asks Barry why Barry would give up the rare and precious gift that was his speed. Barry is rightfully indignant and straight up yells at Force!Iris that he was trying to be a hero and save someones life! C’mon, Speed Force, give us a break!

Wells figures out a way to get to Barry by sticking Cisco in the Fringe Vacuum so that he could reach out for Barry’s hand. Bromantically. Barry sees Cisco, but ignores his hand in order to chase after the shadow after Force!Iris reveals that going back means remaining speedless. Damn.

Barry made a very Mirror of Erised decision when he denied taking Cisco's hand. #TheFlash #DatFlash

Henry, Iris, and Joe figure out that Tony Woodward aka the Bully of Steel aka Zombie!Girder is retracing his steps and searching for Iris. This excites Iris West, intrepid reporter and kickass human being, because now that they know the zombie’s plan, they know how to beat him. She’s been keeping up with crossfit even after her buddy Linda Park left.

Joe and Iris head to the West home to wait for Gilder, and awkwardly pass time questioning Wally West about his changing body. Speed-wise. Not puberty-wise. Puberty already hit him, because Wally is fine as hell. Thankfully, the conversation is cut short when the zombie metahuman arrives.

In a Speed Force Carol, Ebenezer Barry runs into Force!Henry at Nora Allen’s grave. Barry’s never visited his mother’s grave before, on any Earth and in any timeline. Barry has been haunted by his decision to NOT save his mother, so the speed force tries to help him find peace with his choice.

“How could someone ever be at peace with letting his mother die? Deciding that his life was more valuable than hers?” –Barry Allen at his mother’s grave

Grant Gustin is incredible. He is magnetic. I do not want to get into the #NotMyFlash debate, so I’ll just use that statement as a segue for Cisco’s plan to capture Zombie!Girder in an electromagnetic field from the MRI machine. The plan fails, by the way. They all run to a safety room in the lab and bring along In-A-Coma Jesse Quick. It’s time to come up with the next plan after Plans A-G failed.

Barry chases the shadow back to his “childhood home” where Force!Nora Allen is waiting to read him a story about a dinosaur. Sit, Barry. Sit. Barry confesses that he hasn’t forgiven himself for choosing his life over Nora’s despite the countless lives he’s saved because of that decision. It’s exhausting being a hero, and the Speed Force acknowledges it. They want him to rest for a moment and reflect.

The Speed Force is proud of Barry… he is the chosen one. Their pride and joy. their wonderful boy. There is clearly Speed Force favoritism amongst the speedsters of the universe. 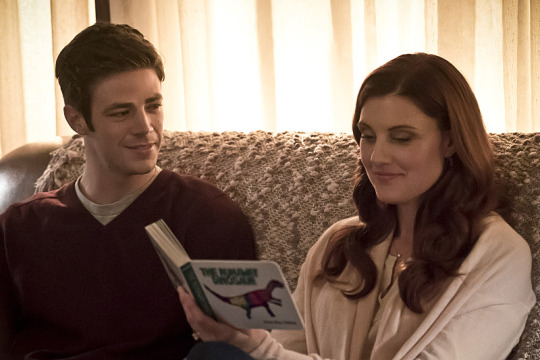 Barry is crying. I’m crying. The gotdamb Speed Force is crying! Kevin Smith is crying. Barry finally releases his survivor’s guilt and pain to finally enjoy “The Runaway Dinosaur.” At the same time on Earth, Iris decides to go get Barry. It’s like with the files in the morgue, Cisco tried, but she needs to be the one who does it. Iris West bcomes Barry Allen’s lightning rod.

Finally, the Speed Force tells our hero what we’ve been waiting to hear: Run, Barry, run.
Barry closes his eyes and catches the shadow as it attempts to run by him. He was the shadow! WHAT? He’s granted his speed back because he is the only one to stand between the earth and unspeakable evil. But first, he’s got to deal with the reanimated Bully of Steel. Again. (Because Girder needs to finally rest. Like Barry finally got some rest. Ohhhhhhhhh…) 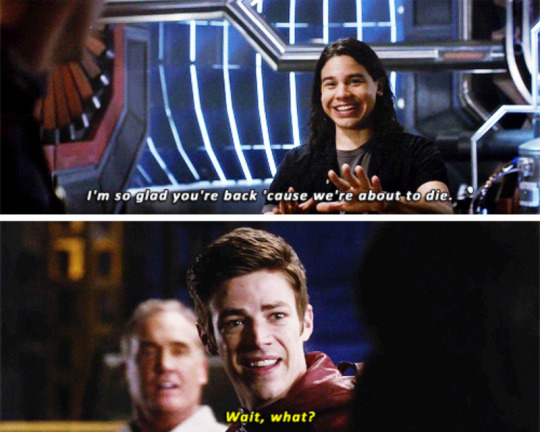 At first, I wasn’t sure if Barry was a little wobbly on his legs because he has to start from scratch or because he’s just re-acclimating to his speed again.

Barry visits Jesse Quick’s bedside. A spark of lightning passes between them, and she wakes up. BARRY ACTIVATED HER! RIGHT? That’s how that works? Quick, someone make Barry hug Wally! The Speed Force is strong in them.

Speaking of Barry hugging Wests… Barry visits his mother’s grave, foreal this time. He brings along Iris just like in Flashpoint Paradox. Kevin Smith is such an obvious WestAllen shipper. The sound of Iris’ voice will always bring Barry home.

So with Henry Allen moving back to Central City, there’s no doubt in my mind that next time they’re going to reveal Henry-2 as the actual Flash-2/the man in the iron mask that is Zoom’s hostage.

Oh yeah, Zoom! He still has Caitlin. He’s still trying to Beauty and the Beast her. He’s still saying “Cait.” He gives her the option of running away to join her friends, or to join his friends. If she chooses her own friends, he will not show her anymore mercy…   Zoom’s “friends” are the metahumans who have decided to reveal themselves in an assumed-to-be-Flashless world; it’s  Berlanti-verse’s own version of a mutant uprising. “OUR WORLD, OUR WORLD!” they chant.