Today is National Coming Out Day. This year I’ve been reflecting on the trending hashtag #QueerSelfLove which emerged in response to the Orlando and LA Pride (attempted) attacks this past summer. It’s an initiative for LGBTQs to reclaim their power and celebrate who they are. It’s a great idea and I’m happy to see so many people have taken to it.

Truth be told, me loving myself has never been the issue when it comes to the systemic oppression I face in my day to day. It also goes without saying that one of the main battlefronts for said oppression is fandom. For me to survive much less thrive, I find myself constantly channeling my patronus. In short, when they come for this Clark Kent, they in turn meet Lucas Trent.

To be a queer person of color is to have gamers like Phil Satyr Brucato and Kraig Blackwelder whitesplain to you why black people are more homophobic than whites.

To be a queer person of  color also means debunking the myth of black homophobia and the frauds like Macklemore.

And then occasionally you get double agents of white supremacy.

Simple negroes with Ankhs (and negroes named Ankh) who think it’s their heterosexual right to make homophobic comments because of who you date and prop themselves as allies.

Or you have fauxteps like Hari Ziyad of Racebaitr fame sexually harass you, call you the N-word and other racial slurs, and send jackals to harass you, simply out of a hissy fit because I wasn’t interested in dating him at all and how dare I find Canadian Prime Minister Justin Trudeau (or any white male) attractive.

“There are Negroes who will never fight for freedom.

There are Negroes who will seek profit for themselves alone from the struggle.

There are even some Negroes who will cooperate with their oppressors.

These facts should distress no one.

Every minority and every people has its share of opportunists, profiteers, free-loaders, and escapists.

No one can pretend that because a people may be oppressed, every individual member is virtuous and worthy. The real issue is whether in the great mass the dominant characteristics are decency, honor, and courage.

A disciple of one Brian Kinney, I’ve learned that when racist white fanbros and fanbeckies come for you, make examples out of each and every one of them decisively.

Queer Self Love means making sure once’s clapback game is more vicious than a piledriver or a powerbomb.

Scene: Local Pro Wrestling Event at the Fairgrounds, a few years back. A group of us were watching the tag team matches and were chatting with Fanboy (a young white male in his early 20s, very nice funny and pleasant guy) one of my buddies befriended. During the match one of the wrestlers decided to embarrass his heel opponents by headbutting them and forcing them to smooch each other.

[One of my friends tries to whisper to Fanboy about me but I don’t think he heard him.]

My wrestling crew and Fanboy sat open mouthed in shock over my response and I nonchalantly turned back to continue watching the match with a triumphant smirk and was waiting for someone to say something out of pocket because there would’ve been two no holds barred matches taking place.

But I’m also glad that he was cool enough to receive the information, apologize, be sincere and we got along perfectly for the remainder of the night.

Queer Self Love is shattering white fragility with a vibranium fist.

Being a queer person of color means racist white homophobes thinking you secretly want them just because you’re attracted to cute white guys. Let it be known that I adore Chris Hemsworth (aka Future Hubby #1) and Chris Christies come out of the woodwork whitesplaining to me how much I obviously want them for no other reason than them being white as one clown did at work one day.

Pulling out my iPad, I pulled up a picture of myself and my boyfriend at the time and showed it to the idiot in question.

Whether it’s everyday bigots or comic book industry pros, Queer Self Love is taking crap from no one. And I do mean no one.

Racist homophobe Chuck Dixon found this out when he and I crossed paths on Gail Simone’s social media page.With Dixon being very outspoken about his feelings regarding gays and blacks for many years, it seemed only fair that I returned the favor in sharing my thoughts about him. 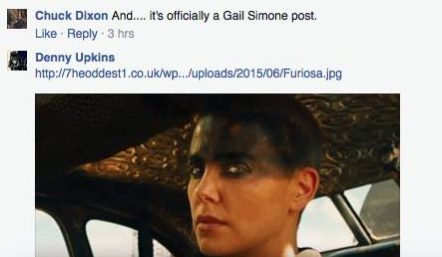 The thread has since been deleted. Let’s just say it did not end well… for him. Reactions to my verbal thrashing were like:

I also made it a point to share this lovely review with him. Another bucket list item checked off.

#QueerSelfLove for me is loving yourself enough to take crap from no one. It also means coming to the sobering reality that it doesn’t get better, it simply gets real.