Aladdin is one of my favorite films of all time. It gave me, as a brown Middle Eastern kid, heroic representation that’s always stayed with me. I’ve already written at length for about my overall very complicated feelings on the live action remake. While the new trailer is solid, it’s also given more insight into the problematic trends this live action movie seems to perpetuate. Overall, I have little to no confidence that this film will improve upon the problematic aspects of the original (besides the welcome addition of having people of color play the main roles), and in fact will double down on more troubling aspects.

Author Clarkisha Kent has written extensively and incisively on a widespread problem we don’t talk enough about: colorism. This is the discrimination by skin tone in communities of color. As you might be able to guess, actors with lighter skin and more Eurocentric features tend receive the most favorable treatment in Hollywood as a result of colorism. However, it is especially a discrimination Hollywood executives levy against women, tending to favor (as Clarkisha notes in her piece) actresses with lighter complexions and other “whiter” features. Many on the internet have noted this happened with Naomi Scott’s (who is half-Gujarati Indian and half-white) casting as Jasmine.

I previously did not talk about this aspect of Jasmine’s casting, focusing more on the fact that an Indian woman was playing an Arab role. Brown people aren’t interchangeable. However, as we’ve seen more and more of Jasmine in the teasers and trailers, and in discussing the colorist aspects with friends of mine who are women of color, like my But Why Tho? Editor-in Chief Kate Sánchez, Flash Podcast co-host Tatiana Hullender, and my But Why Tho? colleague Trishh, it became more apparent to me how white passing Naomi is. She’s still a brown woman of color, but one with relatively lighter skin than Jasmine has in the original and one with far more Eurocentric features. This isn’t to say that there aren’t Arabs, Persians, Kurds, and Indian women who do look like she does in the film, but rather to point out that this isn’t what Jasmine looks like in the original cartoon. Jasmine has more traditional Arab facial features, while Naomi’s are clearly more European. If another darker and less white passing Indian woman with Jasmine’s features were playing her in the live action film, I and many other people would have less of a problem.

Colorism exists in Arab and Middle Eastern communities, but Jasmine was a refreshing break from that: here was a darker skinned, clearly Arab woman in a heroic role. Unfortunately with Naomi’s casting, there was a regression towards the colorist norm. As author Mae Abdulbaki eloquently writes, Middle Eastern people range in a large spectrum of skin color, and Jasmine has long been celebrated as a positive example of a darker skinned Arab woman. Apparently Guy Ritchie and Disney executives thought that only a whiter looking  Jasmine could be appealing to a worldwide audience. 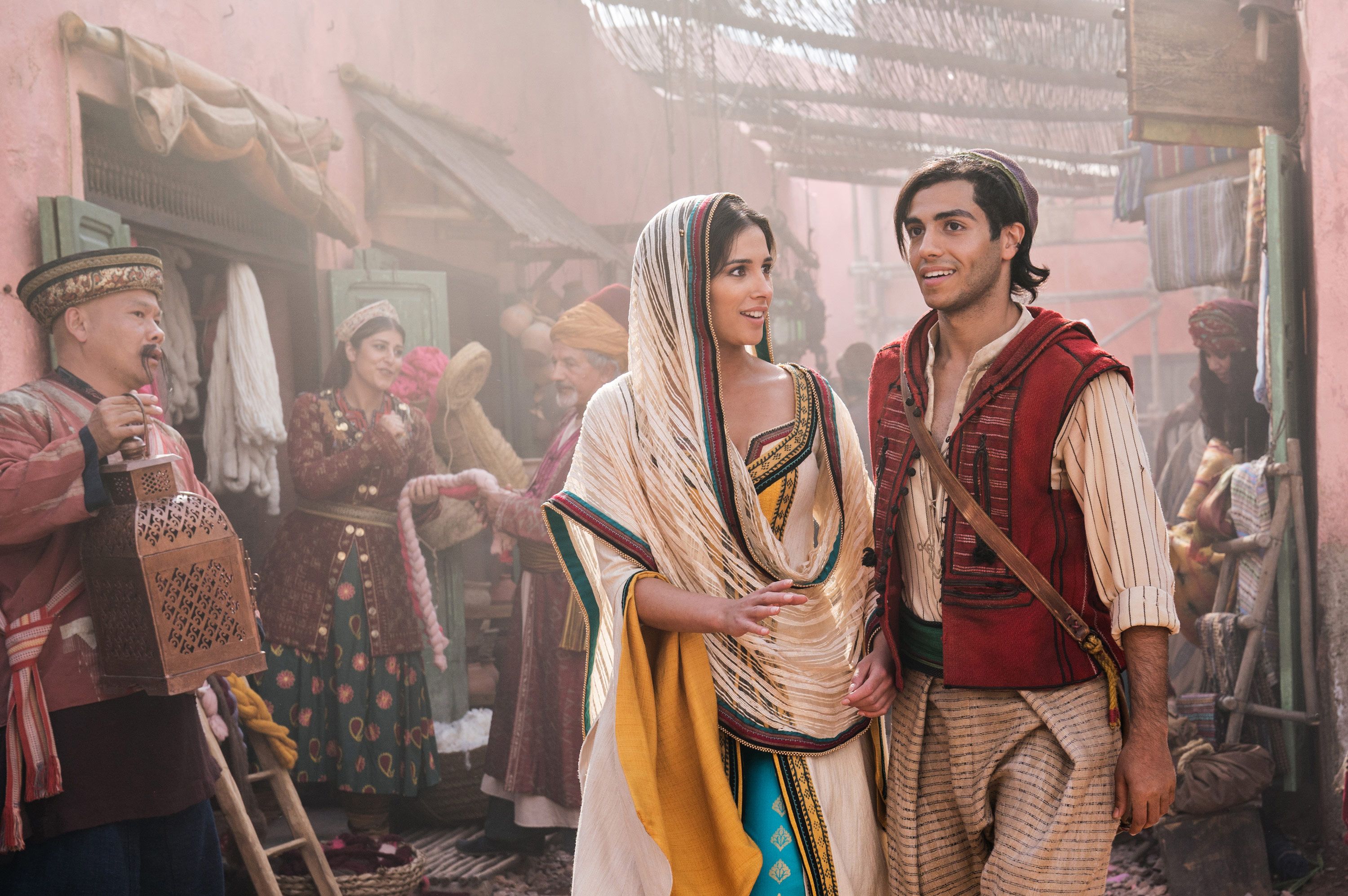 Additionally, the creators of the film are retconning Jasmine’s mother as being from “another land” in the live action movie. This appears to be an attempt at explaining Naomi’s casting, and effectively making this distinctively Arab character less Arab, which would be incredibly infuriating and a HUGE step backward. Colorism is a worldwide problem we need to address, and the live action Aladdin is not making things better.

The little we’ve seen of Jafar’s portrayal is also troubling. While I’m glad that we’ve gotten past the accentuated and racist features of his cartoon portrayal, I can already tell the filmmakers are relying on another Orientalist trope. Orientalism involves many things, but it ultimately comes down to portraying non-Western countries and communities as “exotic,” and “inferior,” and in need of Western rescue. An Orientalist trope in Western media historically has been portraying Arab and other Middle Eastern men as effeminate, and thus “lesser than” the Western characters. Typically this has entailed the Middle Eastern character having a light and airy voice, like we’ve heard Jafar have in the teasers and trailers.

I’ve watched Marwan Kenzari (the actor playing Jafar) in the Netflix film The Angel, and that is not his natural voice. Not that there’s anything wrong of course with a man having a voice that’s not traditionally masculine, but the way Ritchie has apparently directed him here is in that Orientalist tradition. Jafar is not a “real man” unlike the Western-accented Aladdin, and we are thus automatically meant to see him as “lesser than.” I had hoped they would make Jafar a less problematic (including in the way he treats Jasmine), while still villainous, character, but seeing the way they’re apparently using and squandering Marwan’s talents, I’m afraid they might be regressing in this aspect as well. 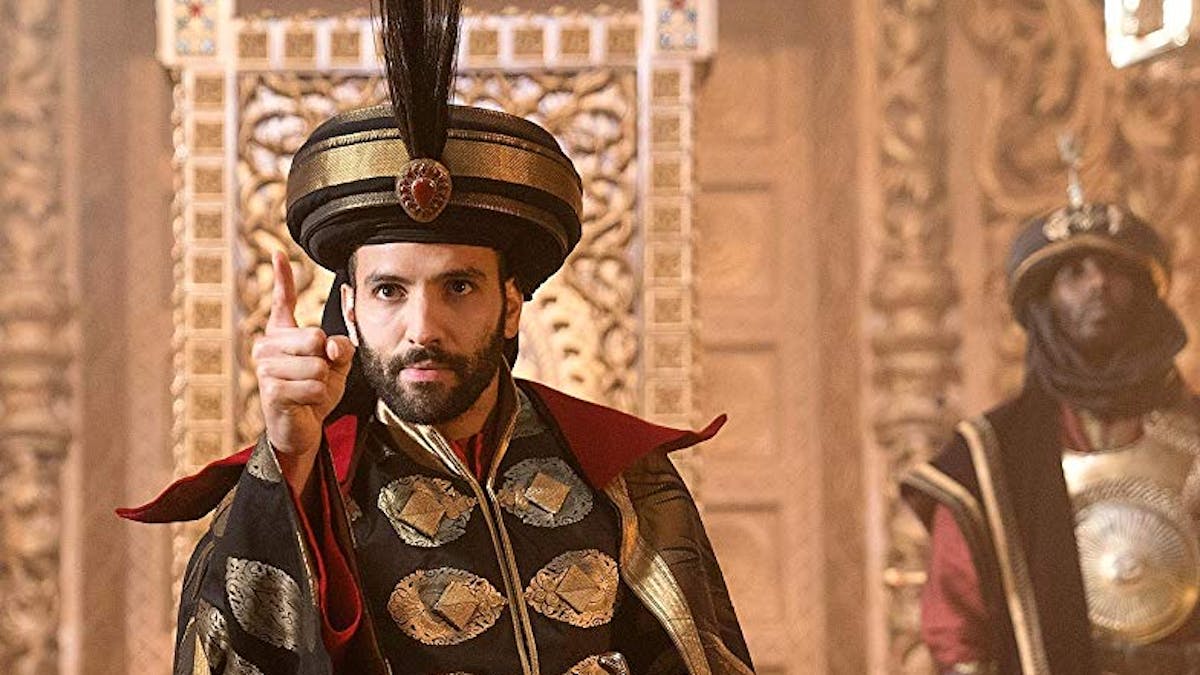 Another aspect of Orientalism, that filmmakers committed in the original Aladdin, and that they seem to now be doubling down on, is assuming that Eastern cultures are essentially the “same” and interchangeable (we already saw this with Naomi’s casting besides the colorist element). For the filmmakers, brown is just brown. We’re interchangeable to them and they think that’s okay.

Of course, that is absolutely not okay. They had the audacity to go on the record thinking they’re “celebrating the cultural diversity of the Silk Road” by having characters from all across the Middle East and Asia. No. They are engaging in Orientalism by excluding actual Arab and Middle Eastern people from the creative process and creating a Western fantasy land (aka “The Orient”) in which Arabs, Persians, Indians, Chinese, and other brown peoples are apparently the same. At least in the original Aladdin, the characters were clearly all Arab (as problematically as they were portrayed and even with its own Orientalism with Indian elements). The approach Guy Ritchie and his team are taking is a racist one in Western media that needs to stop. Period.

The original Aladdin film, its sequel films, and the wonderful Aladdin series will always be there for kids and adults to enjoy, and hopefully they’ll be on the Disney+ service. Sure they’re problematic in their own ways, but at least brown and Middle Eastern kids have had them to enjoy and feel represented in. The new movie is likely to be a white-gazed Orientalist mess, with no Middle Eastern creative input besides some of the actors involved. We need to be pushing for Arab, Iranian, Kurdish, Turkish, and other Middle Eastern representation elsewhere. Regarding this new live action, I’m getting closer to the point of wanting Disney to just, as Ira Madison III would say, keep it.