With the culmination of the San Diego Comic-Con, we’ve been getting a lot of DC Comics movie franchise news. Some of which includes the new footage of the Justice League movie, featuring Batman (Ben Affleck), Aquaman (Jason Momoa), the Flash (Ezra Miller), Wonder Woman (Gal Gadot), Cyborg (Ray Fisher) and Superman (Henry Cavill).

With the introduction of DC’s superhero team, I started wondering — which movie franchise represents its diverse audience more? 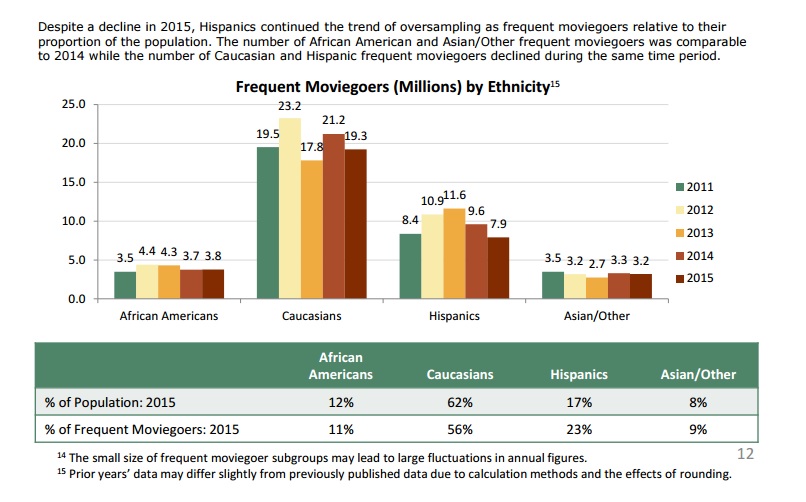 In the movies department, it’s pretty clear that DC is about to school Marvel on using diversity as its opening act. Batman v Superman’s trailer had a frustrating scene for me — the scene in which a ton of extras with Westernized Dia de los Muertos-esque skeleton face paint revering Superman as a god. It looked a lot like the scene from Game of Thrones, with a ton of brown people exalting Khaleesi as their savior. In short, I didn’t like it. And to be fair, not many people liked the movie in its entirety. But, it appears that DC will still have the Marvel beat when it comes to catering to a wider majority of its audience.

Enter the footage for Justice League.

Already, we have an overlapping group consisting of a woman and three people of color (I’m including Gal Gadot in this group, hence the use of the word “overlapping”) — and even though he’s not playing a gay character in the films, the Flash is played by Ezra Miller, who is gay in real life. Already, that’s a heck of a lot more inclusion than Marvel’s Avengers, which is majority white male (the only actual member of color is the Falcon, and the only woman is Black Widow).

DC also has Marvel beat when it comes to treating female characters like actual characters. People have been begging Marvel for years now to create a Black Widow movie, but cries had been falling on deaf ears until very recently, when Marvel finally announced that a Black Panther film and Black Widow film were going to be made. We have finally been getting tons of news about Black Panther, but a Black Widow film is still missing in action. However, the third movie in DC’s official movie franchise is Wonder Woman.

You can read my full thoughts here, but the short of it is that seeing a female superhero do her thing on the big screen is going to instill pride and hope in a lot of girls and women out there. It would behoove Marvel to do the same.

Of course, someone could say, “Well, it’s cruelly ironic that the heroes of Suicide Squad are the evil guys, and that over half of the evil guys are people of color.” Yeah, it is cruelly ironic. But let’s contrast this to Ant-Man, which was also about bad guys becoming the good guys. Except with Ant-Man, Paul Rudd was the genius who actually acted like a genius a good portion of the time. Ant-Man’s friends, played by T.I., Michael Peña, and David Dastmalchian, were supposed to be geniuses, too, but they frequently acted like racially-charged buffoons, characters who seemed to be the brainchild of someone who believed non-white people actually act like stereotypes in real life. It was clear the Rudd’s character was the cool, calm, and collected leader, even though they were all supposed to be on the same level of intelligence.

Sure, a lot of non-white people are the bad guys in Suicide Squad, but at least they all seem to be written to exist on the same level. They seem to all have their own individuality. There’s also the case of Smith’s character Deadshot in the leadership position, a change of pace from Marvel’s status quo. Also great is that Davis is the one in charge of all of them.

Marvel’s films are also failing in another area: proper representation of race. Marvel is quick to tout it’s “diversity” in terms of how many black people they hire for films. They’re especially doing that now, what with Black Panther and the Netflix show Luke Cage. But it took ages for Marvel to finally commit to Black Panther, and before they finally committed, bogus statements had been put out regarding their indecision, such as how supposedly hard it would be to create a realistic Wakanda, even though Marvel had already made Thor, which featured another non-existent locale, Asgard.

Second, it’s not like Marvel has ever had a character of color lead a film until Black Panther; the Marvel universe has had enough longevity to be able to put out several movies with characters of color as the leads, but instead, they’ve constantly resorted to the “goofy, yet smart white male” lead, which makes almost every movie in the latter half of Phase 2 feel like the same movie, just retold with varying degrees of success.

Third, the characters of color the films do have are always in secondary positions. The Falcon has since become Captain America in the comics, but in the films, Falcon is relegated to Captain America’s buddy; I dare say he was relegated to mere “sidekick” in Captain America: Civil War, because Sam all-too-readily agrees to follow Cap into the sunset, even without fully hearing Cap’s plan or questioning Cap’s decision to become a fugitive. Rhodey is a great character, but even still, he’s Iron Man’s buddy. Nick Fury is the most powerful man in the Marvel Cinematic Universe, but sometimes even he is treated like an outside force, a character that is “important,” but is merely a guise to lure audiences into believing that the black characters in the Marvel Universe are treated better than they actually are. Heimdall is also powerful, but as some have said online, they felt Heimdall was nothing more than a glorified doorman, not the all-mighty keeper of the universe and its alternate dimensions.

Marvel also lets down audience members in general by asserting the reductive conclusion that black people equal “diversity,” when there are a lot of people Marvel are leaving out of the conversation. Case in point: Doctor Strange. If you read my online roundtable discussion about Doctor Strange, you’ll find that quite a few people are upset by the lack of foresight given when casting the title character and the Ancient One as white people.

Also lacking in foresight was the decision to “add diversity” by casting Chiwetel Ejiofor and Benedict Wong as Doctor Strange’s… I don’t know… helpers? Again, Marvel assumes the hierarchy of characters should be that people of color fall back as sidekicks or magical helpers, while white characters assume the “default hero” character role. Marvel has also failed when it comes to representing Latinos, people of the Middle East, South and East Asians, Native Americans, Pacific Islanders, and black women. I’m sure I’m missing some other groups as well.

If the only other non-white, non-black Marvel character is Michael Peña’s character from Ant-Man, then it’s clear Marvel’s doing something wrong when it comes to fully representing fleshed-out versions of all Americans. The kicker is that they have representations of fleshed-out characters of color in their comics right now. Ms. Marvel and Spider-Man are two such examples. When are we going to see live-action projects featuring them? How many more white dudes with powers are we going to have to see on the big screen? Black Panther can’t be the only time we see a majority non-white cast in a Marvel film.

DC might have gotten their act together slowly, but they are coming out of the gate swinging with possibilities. We’ve already got Wonder Woman coming, and Aquaman, The Flash, and Cyborg films have already been scheduled for 2018 and 2020. In building a franchise, it would appear DC has been studying Marvel’s failures as well as Marvel’s successes, and it seems like the franchise is planning on welcoming more people to the table.

However, Marvel seems to be slowly getting the message, since they have already cast Brie Larson as Captain Marvel for her own standalone movie:

Watch the Hall H crowd freak out as @brielarson is announced as #CaptainMarvel pic.twitter.com/fDMvgLA1ym

And the cast of Spider-Man: Homecoming has been surprisingly multicultural (the film includes Donald Glover — who had campaigned to play Peter Parker years ago — Zendaya, Hannibal Buress, Tony Revolori, Garcelle Beauvais, Bokeem Woodbine, Abraham Attah, Kenneth Choi, Tiffany Espensen, Laura Harrier, and is rumored to also feature Selenis Leyva). The film has already had to face its share of whitewashing accusations when it comes to the casting of Michael Barbieri as an original character based on Ganke Lee, who, in the Ultimate Spider-Man comics, is Miles Morales’ Korean-American best friend. But have they revamped that decision, based on this picture of the cast?

Despite their flubs, Marvel is working on rectifying their current lack of focus when it comes to representing their huge audience, baby step by stuttering baby step. If Marvel starts getting serious about showcasing LGBT characters too, then I’d be absolutely convinced Marvel has learned its lesson from past mistakes.

What’s fascinating is that while Marvel has a ton of issues to get out of its system when it comes to the movie franchise, the same can’t be said of its TV and Netflix offerings. Such as Luke Cage, which offers up the politically-charged image of, as showrunner Cheo Coker told Vanity Fair, “a bulletproof black man.” Whatever is going on in Marvel’s TV department needs to filter into the movies department. But I’ll write more on the TV side of both the DC and Marvel universes in another post.

If you have thoughts about the movie and/or TV branches of either universe, feel free to discuss in the comments section!

15 thoughts on “DC vs. Marvel: Which Movie Franchise Represents Its Audience More?”