There’s been so much talk about Ghost in the Shell, Dr. Strange, whitewashing, yellowface, and underrepresentation I bet some of you out there are saying, “Man, I might be at my limit!” But wait, there’s more!

When the first look image of Scarlett Johansson as The Major came out, tons of people, Ghost in the Shell fans and regular movie fans alike, were dismayed that yet another opportunity to cast talented Asian actresses passed Hollywood by. Or to put it another way, folks were upset that Hollywood didn’t take the opportunity to advance itself into something better than it has been.

But out of the outrage and anger seen on Twitter (all valid, of course), I think comic book creator Jon Tsuei (author of Image Comics’ RUNLOVEKILL) hit on a very salient point when it comes to why it’s highly important to have a Japanese actress portray Major Matoko Kusangi instead of some American blonde. On his Twitter page, and later here on The Nerds of Color, Tsuei explained how Ghost in the Shell ties directly into Japan’s cultural themes of rebirth and regeneration, particularly when it comes to how Japan itself went through a rebirthing process of its own national identity post World War II.

“The [Ghost in the Shell] manga came out in 1989, the first film 1995. An era when Japan was considered the world leader in technology,” Tsuei tweeted. “Everything hot in that era came out of Japan. Cars, video games, walkmans, all of that. Japan was setting a standard. This is a country that went from poised to conquer…the Pacific to forcibly disarmed. They poured their resources into their economy. And as a country that was unable to defend themselves, but was a world leader in tech, it created a relationship to tech that is unique. Ghost in the Shell plays off all of these themes. It is inherently a Japanese story, not a universal one.”

Tsuei is absolutely right. When I was in my adolescence and teenage years, I remember reading up on Japanese history and learning the cultural and historical contexts that went into projects like Ghost in the Shell.

Learning about what aspects of the Japanese cultural identity went into those projects made me even more connected to the stories and the culture they represented. I felt like I was getting a more complete picture of the Japanese collective consciousness and its anxieties about the past and future. What’s so concerning about Ghost in the Shell having a white lead is that Hollywood is not just committing whitewashing treason, but also cultural amnesia. Hollywood is destroying what makes properties like these special and valuable by engaging in racist practices, which robs its audience of the opportunity to learn more about its global neighbors. It also, as #OscarsSoWhite creator April Reign succinctly stated in the recent No! Totally podcast featuring her and Tsuei, removes the opportunity for a Japanese actress to provide her own frame of reference and cultural experiences for the character. 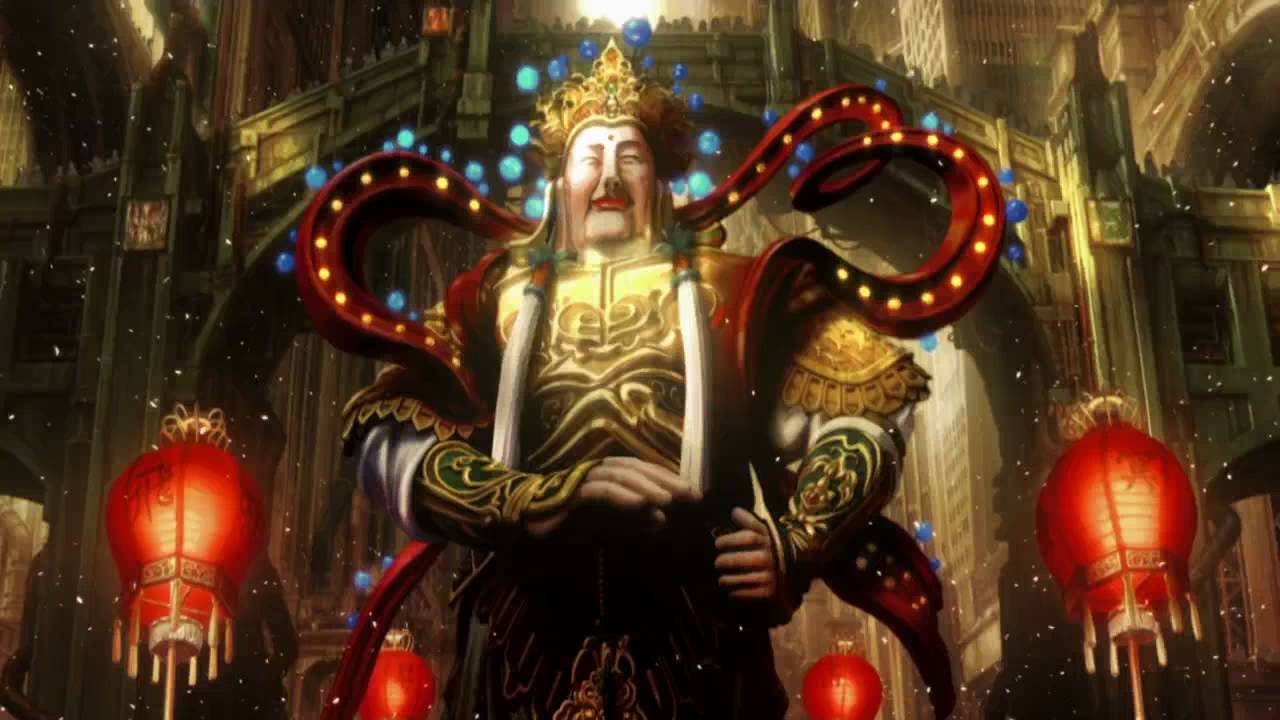 Japan’s reliance on technology for a new national identity

Ghost in the Shell is a direct critique on Japan’s dependence for technology when crafting its new post-war identity, asserting that there might come a time when Japan itself can’t tell the difference between itself and its own technology. It would seem that the warning is becoming a self-fulfilling prophecy since there are Japanese scientists right now trying to create tech seen in Ghost in the Shell, such as the Tachikoma helper robots. This isn’t even counting the fact that the Japanese are well on their way to creating lifelike androids. Japan’s road towards lifelike robots has been critiqued in other anime and manga, such as Outlaw Star (with Melfina, an android who powered the eponymous ship and wondered how human she was or could become — apparently, she was human enough for Gene Starwind to date her) and Chobits (which was both a reaction to Japan’s obsession with humanoid robots and a precursor to the onset of young Japanese men marrying their video game or body pillow girlfriends).

The dependence on technology happened, as Tsuei stated, as a result of the atomic bomb. After Japan weathered the atomic attack committed by America, it needed to find a way to regain its sense of self and culture, much of which was wiped out when the bombs hit (these themes of annihilation are also examined in the gripping animated film Grave of Fireflies and the book Black Rain by Masuji Ibuse).

Japanese automobile and technology companies like Toyota, Nissan, Isuzu, Toshiba, and Hitachi used its militaristic advancements made pre-atomic bomb to help rebuild Japan’s economy post-war, stated John Dower in his essay “The Useful War,” found in Showa: The Japan of Hirohito. Andrew Gordon, author of A Modern History of Japan: From Tokugawa Times to the Present, continues this train of thought. “Japanese private companies expanded quickly and fearlessly,” he wrote. Kenneth Pyle also wrote in The Making of Modern Japan that “[n]ationalism and the desire to catch up with the West persisted after WWII,” but these efforts were now a way for Japan to rebuild itself and reintroduce itself into the global market as a force to be reckoned with. The new technological advancements and the speed with which they were produced helped cement Japan as the technological leader of the world.

Japan in the 1980s and 1990s began reflecting on the cost an adherence to technology was now having on their lives. These themes are best explored by Ghost in the Shell, since the very idea of an identity is conflated with the idea of upgrading technology. If your own body is seen as a product you can exchange for something more powerful and up-to-date, just like how Kusanagi has been seen to change out body parts and entire bodies, then what is an identity? By extension, what is a cultural identity if it’s an identity that can be replaceable? Japan’s heritage is one that’s thousands of years old; and quite a lot of Japanese culture (in terms of monuments, places of worship, and buildings that had been in place for centuries) were wiped out in the blink of an eye. How does a country wrap its mind around losing a huge chunk of its identity by creating a largely artificial one in its place? These themes are inherent in Ghost in the Shell, and by the film’s seeming whitewash of the cultural aspects disrespects everything that Ghost in the Shell represents.

A great example of Ghost in the Shell’s examination of the push-and-pull between a technologically savvy-yet disposable culture and a traditional, yet dwindling culture can be seen in this clip from Ghost in the Shell 2: Innocence, in which a traditional procession takes place in a technologically advanced, yet old-world style street. However, the procession is made up of automaton dolls, which also have a place in Japan’s past (as stated in Yoshiko Okuyama’s Japanese Mythology in Film: A Semiotic Approach to Reading Japanese Film and Anime, the Edo period was fascinated with dolls, or ningyō, that were automatic).  The music throughout Ghost in the Shell 2: Innocence is sung in the min’yō or “folk song” style, evoking more of old Japan coming into conflict with the Japan built from the ashes. Even the dolls burned in the scene evoke a feeling of disposability, harkening back to the disposability of our lead heroine’s own body.

“[A]fter asking whether you think [the robot “shells” are] a necessary element, you’re left asking by the end of the film what exactly are the uses of a human body which has no unique identity of its own,” states Emad Ahmed for The New Statesman. Anyone can argue that a Ghost in the Shell movie starring anyone could make the same argument, but the cultural nuance that was imbued in the media by that statement—the anxiety Japan faces as it takes on a new “shell” to forego the past—is something important that Hollywood shouldn’t have left on the cutting floor.

The cultural tie between Buddhism, technology, and the “ghost”

The concept of Ghost in the Shell is rooted in post-war existentialism, but it’s also rooted in Shingon Buddhism as well. The concept of kami, or spirit, is extended even to inanimate objects. Tsukumogami, translated to “Kami of tool” according to the Yokai Wikia, is a type of being that were once inanimate objects, but have gained a soul after serving their owner(s) for 100 years.

As Ghost in the Shell 2: Innocence director Mamoru Oshii told The Japan Times film critic Mark Schilling (recounted by Okuyama), “In Toy Story, the dolls are just objects that humans bring to life, for their own amusement. The Japanese have a different view: they think that dolls have a spirit.”

This idea ties directly into Kusanagi’s own existentialism about her body and her life, and if she even has what one would consider a sentient soul. The tsukumogami theme is throughout the film, with the film constantly reiterating the tie between dolls, “shells,” and the possibility of sentience and transhumanism. Even the film’s main song, “The Ballade of Puppets,” describes the anguish of disposability and the replaceable world that makes up a puppet, or a “shell,” or a doll’s life. 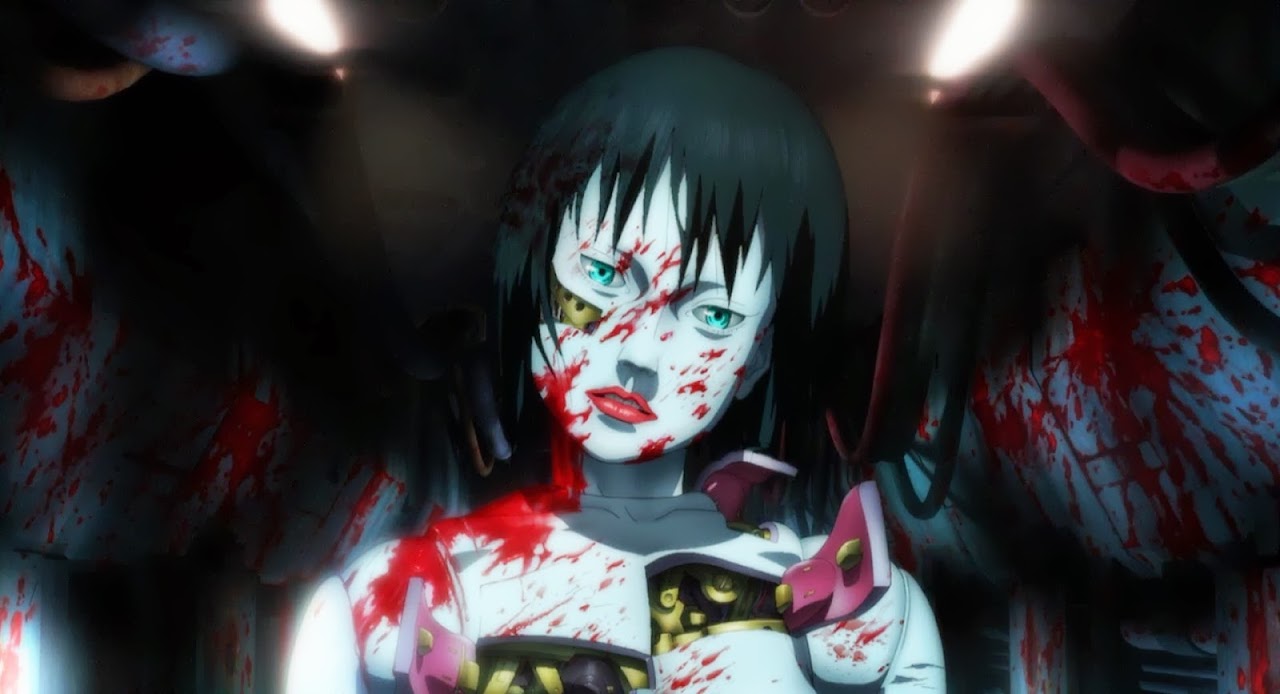 “‘Even though in this world we may know grief and suffering/Our dreams shall never die,’ and they fall from the branch in anger,” notes that the blossoms, all of which are replaceable with new clones of themselves, fall indignant at their place in world and at how meaningless their lives seem to others. This echoes the same themes of Kusanagi being able to find a new body, or how the sex robots she’s trying to protect are made en masse, or how, again, the Japanese culture at large is transplanting itself from the ways of old to the technologically advanced, and possibly emptier and more replaceable, ways of the future. Kusanagi is more than just a cyber crime officer. She’s a metaphor for Japan itself, constantly in a flux of change ever since the floor was swiped from beneath them due to the atom bomb.

“Our dreams shall never die”

Ghost in the Shell may be manga-turned-anime, but just because it was originally a comic book or a cartoon doesn’t mean it should be treated with the same casual regard as a standard American comic book movie. The relevance Ghost in the Shell has to Japanese culture is something that should be honored in any live-action production, because without the culture, what do you have? You have empty movies about some random cyborg police officer without any of the exploration about why that theme is important to both a Japanese and global consciousness. Hollywood is supposed to be all about the exploration of the human condition, and Ghost in the Shell is nothing but an examination of the human condition. Somehow, Hollywood didn’t pick up on that, going for the lazy route instead.

Monique Jones is the owner and editor of COLOR, a website that offers something to get through your television and film viewing; a guide to where the rest of the rainbow is. A singular place where you can find out more characters who look like you. In addition to COLOR, Monique has written for Entertainment Weekly, Antenna Free TV, Black Girl Nerds, Racialicious, and many other outlets. Follow her on twitter at @moniqueblognet.