END_OF_DOCUMENT_TOKEN_TO_BE_REPLACED

This year at San Diego Comic-Con, we took Hard NOC Life on the road and spoke to numerous comic professionals on the floor of the San Diego Convention Center. We’ll be posting these interviews all week.

Today, we kick things off by going one-on-one with Bernard Chang.

END_OF_DOCUMENT_TOKEN_TO_BE_REPLACED

King, the dystopian sci-fi adventure from Joshua Hale Fialkov, Bernard Chang, and Marcelo Maiolo, is now available in graphic novel form. And artist Bernard Chang wants to give you original art from the book!

END_OF_DOCUMENT_TOKEN_TO_BE_REPLACED

It’s the distant future, it’s Los Angeles. So the desolate wasteland in King — a new creator-owned comic by Joshua Hale Fialkov, Bernard Chang, and Marcelo Maiolo — is no stretch. The titular man is the last of his kind, left on an Earth we recognize only in its rubble, surrounded somehow by talking dinosaurs, humanoid animals they call CrossFreaks, and of course, giant karate robot bears.

END_OF_DOCUMENT_TOKEN_TO_BE_REPLACED

We are a couple months out from DC Comics’ soft reboot of their entire line up. One of the changes that will be coming this summer is that long time DC artist — and friend of the NOC — Bernard Chang will be shifting from Green Lantern Corps to art duties on Batman Beyond!

To celebrate the Green Lantern Corps fans and reward them for their loyalty for the last two years, Bernard will be giving away original interior art from his run on the book on Instagram!

END_OF_DOCUMENT_TOKEN_TO_BE_REPLACED

Can it be? Am I actually excited about DC Comics? Again? I’ve made no bones about my aversion to the company-wide reboot of 2011, but it seems that starting this summer, DC is dropping the The New 52 branding and starting fresh with all-new books, and a diverse and wide-ranging roster of talent, including — full disclosure — several friends and alums from the SIUniverse! So maybe I’m a little biased.

END_OF_DOCUMENT_TOKEN_TO_BE_REPLACED

Want to see how a vendor booth goes from being a bunch of cardboard boxes to an elaborate thing of t-shirt selling beauty?

Today is the first day of New York Comic-Con, and Epic Proportions is once again taking up some prime real estate in the Jacob Javits Center. If you are going to be at the show, come by and say hi at Booth #2010. We even have DC Comics superstar Bernard Chang at the booth for the whole show!

Click through to see the evolution of the Epic Props Booth.

END_OF_DOCUMENT_TOKEN_TO_BE_REPLACED

Its that time of year again! One of my favorite times of the year!

Once again I’ll be at New York Comic-Con at the Javits Center at Booth 2010. The same location as last year and the same size booth! Meaning, its another 10×20 corner booth. Which might not mean a lot to most people, but this is a BIG deal for me.

And I have some really cool news too!

My good friend Bernard Chang will be joining me at the booth the entire con!

END_OF_DOCUMENT_TOKEN_TO_BE_REPLACED

So the New York Asian Film Festival (NYAFF) has come to an end, at least for me. This year, I helped put together the poster show which was a LOT of work.  More than I expected, to be perfectly honest. But it was worth every sore muscle and second that was put into it.

As usual Goran, Rufus, Samuel, James, and Grady put on an amazing event. It was just so much fun to be a part of. I’m just going to let these pictures do the talking for me.

END_OF_DOCUMENT_TOKEN_TO_BE_REPLACED

You may recall back in April, we let you know about the Old School Kung Fu Film Fest in New York City. To coincide with the films shown, the festival’s organizers commissioned the homey Jerry Ma — of Epic Proportions — to curate a little art show with world renowned artists interpreting their own movie posters for each of the films shown.

Well, this weekend, those pieces of art (and more) are going to be presented at Lincoln Center as part of the New York Asian Film Festival! Featuring the work a slew of NOC-friendly artists, including Larry Hama, Bernard Chang, Jef Castro, Ken Knudtsen, and John Jennings!

Check out the official announcement after the jump.

END_OF_DOCUMENT_TOKEN_TO_BE_REPLACED

Last September, I mentioned how I was honored to coordinate and edit a digital comic in conjunction with the Smithsonian‘s touring “I Want the Wide American Earth” Asian American history exhibit.

(And once again, many thanks to Lawrence-Minh Bui Davis and Konrad Ng for allowing me to be part of such an honor).

Since today is the 72nd anniversary of Executive Order 9066, and a Day of Remembrance for the 120,000 Japanese Americans who were interned during World War II, I wanted to share Bernard Chang‘s contribution to the Smithsonian project. Titled “Internment/Service,” Bernard‘s illustration honors the Japanese Americans who fought for justice abroad while their families suffered from injustice at home.

END_OF_DOCUMENT_TOKEN_TO_BE_REPLACED 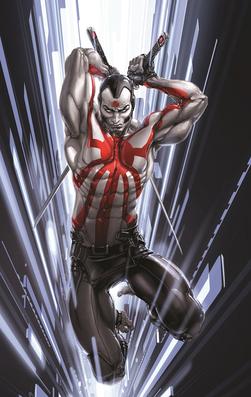 END_OF_DOCUMENT_TOKEN_TO_BE_REPLACED

Apparently, while the Nerds were all consumed with Star Trek last week, other stuff was happening on the Internet. So here’s a brief rundown of things you might have missed because you were too busy exploring strange new worlds and seeking out new life and new civilizations. But first, let me get a little self-congratulations and self-promotion out of the way.

Welcome Pop Candy readers! And a big thanks to Whitney for giving us a little plug in her USA Today column. We hope you all enjoy the NOC community and join us as we look at “pop culture with a different perspective.”

Okay, that was the congrats, now here’s the shameless self-promo.

Over the weekend, the Smithsonian Asian Pacific American Center opened its traveling Asian American history banner exhibit “I Want the Wide American Earth” at the Japanese American National Museum in Los Angeles — after spending the last three months on display at the Smithsonian’s National Museum of American History. In honor of the exhibit’s West Coast opening, the Smithsonian APA Center unveiled an online digital comic I edited that features key moments in Asian American history illustrated by some of the top names in the comic industry, including Bernard Chang, Ming Doyle, GB Tran and my SIUniverse partners-in-crime Jerry Ma and Jef Castro.

You can see the comic online here. A downloadable version is still forthcoming.

So there’s that. And after the jump is other stuff on the web you should be reading: