Warning:  spoilers for season two of Marvel’s Agents of S.H.I.E.L.D., including the season finale, are included.

In my earlier post about Marvel’s Agents of S.H.I.E.L.D., the agonizingly long list of characters of color who have been either killed off, turned evil or left physically mutilated illustrated the series’ awkward reliance on negative racially-coded tropes.  Now that the season is over, let’s finish that list, shall we?

Agent Calderon, played by Kirk Acevedo.  Not evil, but kind of an asshole. Critically injured, but not dead.

Robert Gonzales, played by Edward James Olmos. Killed by Inhumans, except for his mustache, which escaped the stone-like necrotizing effect of the Terrigen Crystals. Long live Gonzales’ mustache, long may it wave.

Mike “Deathlok” Peterson, played by J. August Richards. The Job of season one, returned for a season two appearance, only to be once again mutilated by HYDRA. But at least only his mechanical parts were removed this time. I fully expect him to return in season three for another round of abuse. See ya later, Mike.

Raina, played by Ruth Negga. Killed by Inhumans. Sorta-kinda redeemed just before dying. I’ll miss you most of all, but see you in AMC’s Preacher.

Sunil Bakshi, played by Simon Kassianides. Killed by S.H.I.E.L.D.  Although played by a European actor, Bakshi was still a person of color.

Agent 33, played by Maya Stojan. Not confirmed if she is a character of color, despite being played by an actor of color. Still, she was killed in her guise as Agent May (Ming Na Wen), so let’s put her in the POC column.

Jiaying, played by Dichen Lachman. Evil, revealed to be an energy vampire, killed by Mister Hyde. She might not be dead, though, which means she could return in the future to be killed again. And then again after that, probably.

In the last quarter of this season, the spy organization fell in a coup led by a splinter group of disgruntled S.H.I.E.L.D. agents headed by Robert Gonzales. Gonzales objected to Director Coulson’s leadership mainly due to Coulson’s apparent lack of alarm over superpowered individuals, although even with the season over and Gonzales dead, his motivations remain as murky as ever.

In what is building to a tie-in to Captain America:  Civil War in 2016, S.H.I.E.L.D. is divided among itself as to whether superhumans are a benefit or threat to humanity. This is a theme Marvel Comics have explored for decades, notably in the classic X-Men run of Chris Claremont through the ’80s. Claremont took Marvel’s Frankensteinian subtext of superheroes being potential monsters as well as protectors and expanded on it, making it a major theme of the book. Mutants were feared for their power, and openly persecuted by humanity-at-large. Under Claremont’s tenure on the title, the X-Men became stand-ins for any oppressed race or group, and remain so to this day for many readers.

In season two of Agents of S.H.I.E.L.D., we are introduced to the Inhumans, a hidden, offshoot race among humanity who are the result of genetic experimentation by aliens. In the Marvel Cinematic Universe, the Inhumans are the equivalent of Marvel’s mutants. Having sold the film rights to the X-Men to Fox, Marvel can’t use mutants in their own movies; therefore, Inhumans.

In Agents of S.H.I.E.L.D., Inhumans are being used explicitly as the X-Men had been under Claremont; they are victims of persecution and intolerance. Gonzales, in a not-so-subtle way, calls them “things,” not people. He referred to Agent Skye — the star and focus of the series, mind you — as an “it,” her super-powered status erasing her humanity entirely. His faction of S.H.I.E.L.D. is on board with this; they sent a team out to kill her, and having failed that, sought to be able to contain her in their custody. Most of Gonzales’ inner council have expressed, at best, xenophobic attitudes toward Inhumans and other powered people. 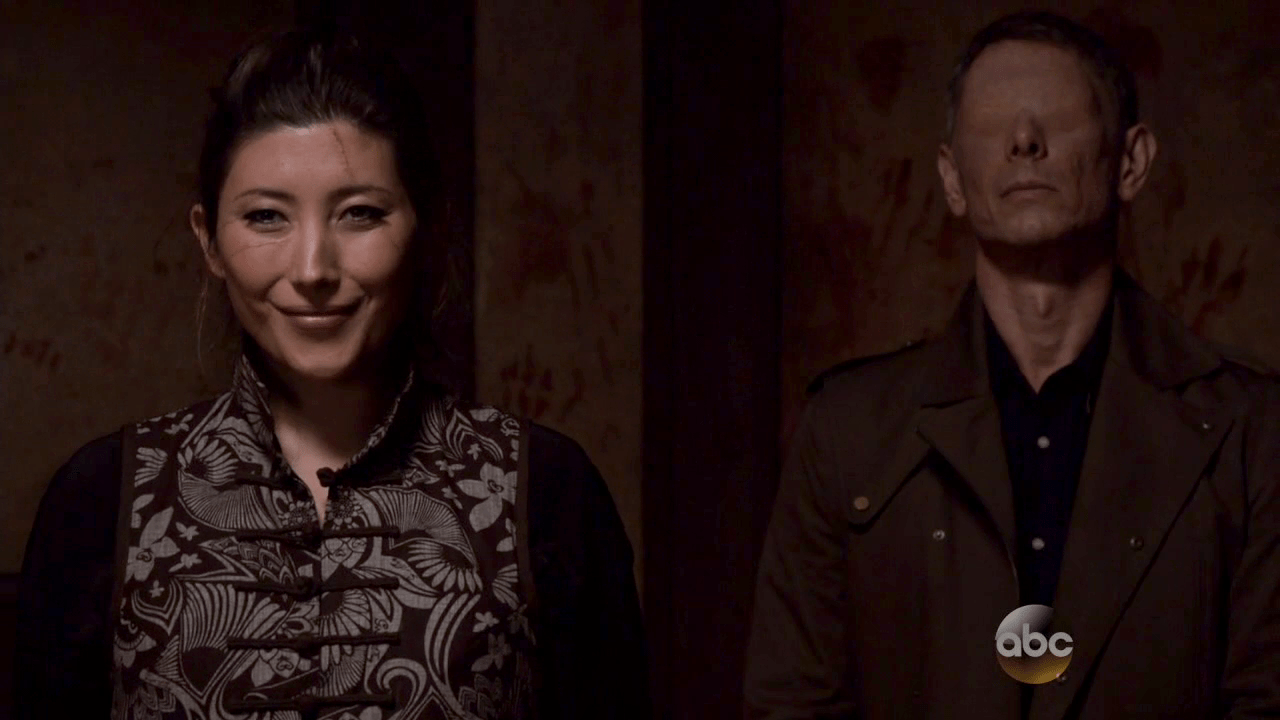 At a time when we have people of color (mostly black) protesting pervasive and systemic racist police brutality across the U.S. on a daily basis, with all the tension of white fatigue and backlash looming, it’s highly irresponsible — not to mention utterly boneheaded — to portray people of color as “the real racists” on any TV show.

This is where the aesthetics of dramatic storytelling run face-first into the realities of actual oppression, and serves to underscore the severe limitations of using a fictional fantasy race to carry the weight of representing all persecuted classes of people. The X-Men or Inhumans are horribly reductive as a symbol of one-size-fits-all racism.

Whether in the comics or on TV, it is predominantly white male writers who are using these characters as mouthpieces of the oppressed, and as Orion Martin points out in his
article “What If the X-Men Were Black?” it is done often using characters of color as props reinforcing the (white) heroes’ evolved
magnanimity. In Agents of S.H.I.E.L.D. that means Mockingbird questioning the Gonzales group’s overt racial paranoia, and not Mack. And in Claremont’s X-Men it resulted in verrrrrry awkward exchanges like this:

The voices of actual oppressed groups are not only silenced, but are co-opted, their experiences turned against them to position white morality as fundamentally superior.

However, for the final episodes of the season, the writers backed away at the last moment in portraying Gonzales’ group as the xenophobes they’ve been set up to be. Where we’ve been expecting Gonzales to show his true colors during his peace talks with the Inhumans, in Whedonesque tradition the true villain is revealed to be Jiaying, Skye’s mother and the leader of the Inhuman faction.

Gonzales’ sudden portrayal as a peacemaker, despite his tough talk of protecting humans if any Inhuman steps out of line, feels very unearned. It’s a cheap twist done purely for shock effect and feels like it. It remained unclear as to what the motivations were for Gonzales’ mistrust in the first place; was it from personal experience, as it was with Jiaying, or are we to assume he was just a bigot? Note that Jiaying is allowed a complexity of motivations where Gonzales is not; we don’t know if supers killed his wife, which resulted in his hatred. We just aren’t told. We were, however, shown Jiaying’s torture and dismemberment by HYDRA, which allows us to empathize with her broken nature even as we condemn her hatred for humanity. Gonzales is never presented as anything more than a plot device, first to antagonize our heroes, and then sacrificed to restore the original order of Coulson in control of S.H.I.E.L.D.

It’s a reality in television production that when it comes to giving any character adequate screentime to provide depth and maybe nuance, it helps if that character is portrayed by an actor who is a regular cast member. Despite Mack appearing in every season two episode of Agents of S.H.I.E.L.D., he was not a regular cast member. Recurring guest stars, such as Henry Simmons, can be exited from a series at any time, they are not contracted to appear for a full season the way regulars are. Writers tend to service characters played by cast regulars;  the longform serial nature of a network series means you have around 22 hours a year to get into the meat of those characters. Characters like Mack, therefore, are the first to be underserved, and the first to be written off, as the demands for them aren’t locked in.

So it’s not enough to want diversity in casting or in the writing staffs of TV series. For a series to guarantee in-depth characterization for POC, you’ve got to not only cast them, but contract them as regulars as well. Of the eight regular cast members of Agents of S.H.I.E.L.D., six are white, and another is half-white. It becomes obvious which characters on the series are going to have the most focus, the most depth, and no chance of being killed off.

4 thoughts on “Diversify Cast Regulars on Agents of S.H.I.E.L.D.”

A.L. Baroza is an animation story artist in Los Angeles. He is the creator of the webcomic Rose Madder (www.rose-madder.net) and promises to get back to something approaching a regular schedule soon. His opinions are strictly his own and not reflective of any affiliated parties or megacorporate entities, because biting the hand that feeds inevitably leads to tears. Bitter, bitter tears. View all posts by A.L. Baroza