Since The Nerds of Color is not the only awesome thing on the internet, we spent the holiday break scouring the web for some of the most NOC-relevant links around. Here are six things that have gotten the most buzz around the N.O.C. offices.

The folks over at Comics Alliance have posted some New Year’s resolutions for the comic book industry that we can all get behind.

Among their 10 Diversity Resolutions for Superhero Comics in 2014, this one is probably the most important. Heck, they even say so themselves!

These resolutions aren’t ordered by importance, but if superhero publishers only make one pledge in 2014, this one matters most; we need more minority creators in the industry. More editors, more pencillers, inkers, colorists and cover artists, and, perhaps most importantly, more writers. If the people making comics are as diverse as their potential audience, the comics they make are more likely to reflect and appeal to that audience.

Sticking with Comics Alliance for the moment, they also have screenshots of the upcoming nuptials of The Simpsons‘ famed “Comic Book Guy.”

In the January 12 episode “Married to the Blob,” it looks like the owner of Android’s Dungeon & Baseball Card Shop will be tying the knot with a manga artist named Yumiko. And while I’m happy that dude has found true love and is getting married, I still have reservations about the ep. Let’s just hope that it doesn’t descend too far into cultural stereotypes.

On NPR’s Code Switch blog, after reaching out to people on twitter (including yours truly) to find comic artists, writer Kat Chow tracked down cartoonist Yumi Sakugawa for an interview about her newest book I Think I Am In Friend-Love With You.

In the piece, Sakugawa speaks at length about relationships, her art, and being Asian American:

When my stories aren’t so based on monsters or fantastical creatures, my characters do tend to be Asian-American, even if they don’t explicitly deal with Asian-American issues. There are always going to be little details that signify that they’re Japanese-American or Asian-American, whether it’s their names or the food that they eat or the things they talk about. I think it has a significant role in how I make my artwork and how I tell my stories.

Speaking of Asian American storytellers, award-winning author Chang-Rae Lee — one of the most well known novelists about the Asian American experience (it’s hard to believe Native Speaker is nearly 20 years old!) — has decided to dip his toes into the world of speculative fiction with his newest book, On Such a Full Sea. 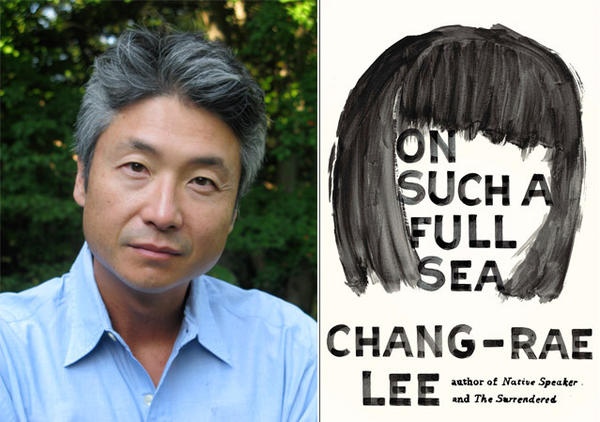 In his review of the book for the Los Angeles Times, author Porochista Khakpour describes the novel thusly:

Lee creates his own radical mythology, tonally, ambiently and architecturally, in sketching a post-America future made up of three rungs of society: labor colonies, free open counties, elite Charter villages. In B-Mor, formerly known as Baltimore, laborers are descended from the Chinese, and their only purpose is to work in Brave New Agriculture (tank-raised fish and vegetable production) at the service of the Charters.

On Such a Full Sea will be released in bookstores everywhere tomorrow.

On New Year’s Eve, Dwayne Johnson, aka The Rock, aka Hollywood’s favorite movie franchise rejuvenator, used twitter to send the nerdosphere into a tizzy when he teased a potential DC Comics project with Warner Brothers.

We just had a big meeting w/ Warner Bros CEO re: @DCComics 2014 we will partner up and create the cool bad assery. #RockTalk @ActionTilson

While I don’t think The Rock is referencing being involved in the Man of Steel sequel, I guess it’s a possibility. The internet seems to think he’s referencing Lobo (a role he had been linked to previously), but y’all know which Pacific Islander I feel should be the Scourge o’ the Cosmos. Hint: his name rhymes with Jason Momoa.

Finally, at the blog of steamfunk author Balogun, the writer of Moses: The Chronicles of Harriet Tubman makes the case for why black children need to read and write science fiction.

Realism has become a trap for black children and they realize it. According to my young students, who range in age from nine to fifteen, they tire of reading and writing stories that are about “problems” and crave fantastic tales of derring-do with cool, young, Black heroes and heroines.

One thought on “Waking Up From a Long Winter’s Nap”