In a fateful example of perfect timing, the airing of Into the Badlands episode nine, titled “Nightingale Sings No More,” coincided with Mother’s Day. So how does the Badlands writing crew celebrate mothers? By ripping their babies away from them, locking them in solitary confinement, and having them duel their daughters in deadly sword-to-sword combat, of course! More on that in a minute…

I have to admit, though, I had the toughest time coming up with my weekly Hamilton references for this episode. I don’t know if it was because I was too caught up in the story or if there were fewer parallels than usual. Either way, I was thisclose to giving up on my #IntoTheHamLands streak of recap titles! Perhaps I felt added pressure since the Badlands writers tweeted this out prior to the West Coast airing:

Twitter, you'd best be on your #IntotheHamLands game tonight. https://t.co/pNNDTnOQ2d

As I alluded to earlier, a running theme in this week’s episode was about characters breaking free from their alliances. For example, Veil, after going through that sham of a wedding last week, stopped pretending to care about Quinn — and had Henry taken from her as a consequence. Over in the Sanctuary, Widow and Sunny’s fragile alliance was also cut short once he learned the truth about Minerva’s treatment of Veil. The biggest break of the episode, however, involved Tilda and Widow, which leads me to this week’s HamLands.

You eagle-eyed (or -eared, I guess) Hamilton fans might have recognized this week’s recap subtitle as a reference to the song “Washington On Your Side.” If you didn’t pick up on it, don’t feel bad. They’re only two of thirty-plus words Daveed Diggs says in rapid succession halfway through the song. In it, Diggs’ Thomas Jefferson realizes that his differences with the President will no longer allow him to be part of the Administration so he must resign. Similarly, Tilda understands her complicity in the Widow’s machinations and basically does the same — though with much more violent consequences.

Basically, Tilda finally understands that Widow’s intentions may not have been as pure as she was led to believe. Tilda’s distrust of Widow was first made apparent when Veil arrived at the Sanctuary seeking shelter. This distrust was only deepened when Veil was subsequently traded back to Quinn in exchange for… no one really knows. Tilda finally goes over the edge when she thinks Widow has harmed her first crush M.K. — meanwhile, her current “friend” Odessa isn’t too happy about M.K.’s return either.

It all comes to a head when Tilda and Widow face off in the conservatory. This fight has actually been a long time coming. If you recall, Tilda had a chance to turn on Widow in season one but didn’t act on it. Ultimately, Widow bests her “daughter” and is content with “teaching her a lesson.” Tilda, though, begs to be put out of her misery. Widow seemingly obliges, and the internet freaked out in response. Fortunately, Badlands supervising producer LaToya Morgan quelled our fears.

I'm not in front of my TV but unless they aired a different episode cut I'm pretty sure Tilda is still alive. Just TKO'd. #intothebadlands

Of course, Tilda v Widow: Dawn of Butterflies wasn’t the only thing that went down. The episode actually started with an interesting flashback that confirmed what most of us had been speculating all along: Minerva is the novice Bajie nicknamed “Flea.” 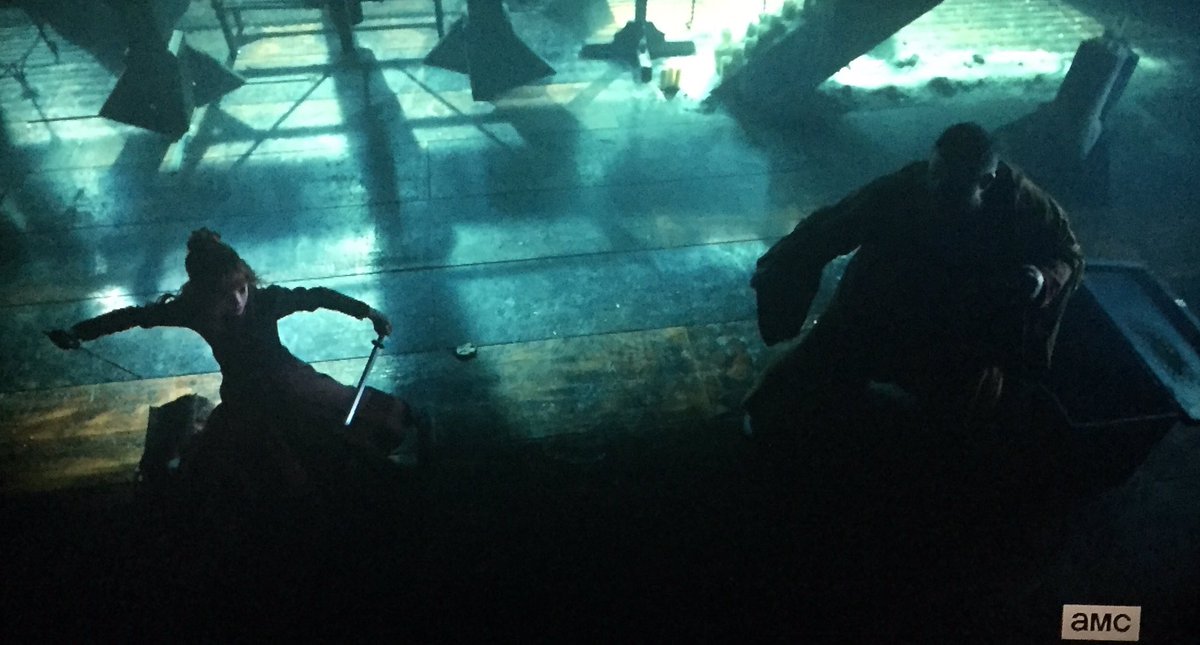 The confirmation of Widow’s past only solidifies her motivations in the present and clarifies her obsession with M.K. in season one. She too once had the dark gift and seeks Azra. Unlike M.K., though, Widow wants the power back. Bajie also has some kind of mysterious connection to Azra as well since he perked up at the sight of Flea’s Azran book the same way he did when pocketing M.K.’s compass. Hopefully all will be revealed during the finale.

In West Avalon — aka the Armadillo bunker, we learn how Quinn is able to elicit such devotion from his Clippers. Sure, he’s a cult leader with the charisma of a Southern preacher, but he also offers his minions ice cream. Vanilla Ice Cream. And they’re all like…

It must have been some bomb ass ice cream too because it leads Gabriel to strap an actual bomb to his chest when he sneaks into Butterfly territory to blow them all to smithereens. But not before he tells Sunny the truth about Widow’s alliance with Quinn and shatters the Widow/Sunny alliance before it can even get started.

Now I’m not exactly sure why Widow was so quick to sic her army on Sunny. She could have claimed Gabriel was lying or that she had a reason for sending Veil back to Quinn. Either way, fisticuffs could have definitely been avoided. Instead, Sunny loses the army he was hoping to have to march on Quinn’s forces and we’re deprived of a genuine Widow-Sunny team going into the finale.

One thought on “NOC Recaps Into the Badlands: Disciplined Dissidents”