For those of you unaware, I’m a 31 year old Chinese-American. I was born in this country to parents who immigrated at various points in their lives. My father spent most of his life here, my mother moved here to marry my father. The way they raised me — the way they approached raising me and the challenges that both they and I faced — are very familiar to anyone who is an immigrant, or whose parents are immigrants.

For a long time, I held the belief that being Chinese-American (or anything-American) was a matter of being on a spectrum. You could be “more Chinese, less American” or “very American, a little Chinese.” I believed this was static, and that you couldn’t change who you were. The truth is, you aren’t either. You’re the hyphen.

That little horizontal line is the sum of who you are. You are in between the two. Sure, some immigrants never truly integrate into the dominant culture, but even then, there’s a difference between being an “American” (which pretty much means White, or White-like) and “Chinese.” But I’m not one or the other, I’m not mostly one, or mostly the other.

Now, transpose that onto Danny Rand (honestly if he were half-Asian, the metaphor would be laid out a little more bare), as Iron Fist, and look at the depth of interaction you could have: cultural tension between Danny and his family, flashbacks to being bullied for being different. Comics can be very on the nose with these type of topics, and I feel like there’s an opportunity for that here.

This is a country of immigrants, there are plenty of children of immigrants or biracial people who would identify with an Asian-American Iron Fist (half-Asian or full-Asian). Jessica Jones was a major step forward in presenting us with a nuanced, intricate female super powered protagonist. I hope Mike Colter’s Luke Cage does that for African-Americans, but is it too much to ask for a little more? I love Into the Badlands, and Fresh Off the Boat is enjoying mainstream attention, but let’s keep that going forward.

One of my many dreams in life was to be a fight choreographer, but underneath that is a desire to be an actor, and that’s something I never saw on screen. All I had was an intensely bad-ass martial artist (Bruce Lee), a stoic bad-ass martial artist (Jet Li), and goofy slap-stick stunt man (Jackie Chan)… I love those performers to death, for the groundbreaking they did, but it’s time for more nuance, more depth.

This is a little off the beaten trail from Iron Fist, but given the very strong anti-Muslim undercurrent in this country at the moment, I wanted to call out another Marvel character who perfectly exemplifies what I believe could be done with Iron Fist: Kamala Khan, aka Ms. Marvel.

Ms. Marvel is the brainchild of writer G. Willow Wilson, artist Adrian Alphona, and editor Sana Amanat. Kamala Khan is a Pakistani-American who lives in Jersey City, who eventually discovers she’s an Inhuman, with the superpower to change the shape of her body: stretch, “embiggen,” and shrink amongst other abilities. She’s a high school student, a superhero fangirl, and also a faithful Muslim daughter to two immigrant parents, with a very devout older brother.

Kamala’s life, despite our backgrounds being different, is very identifiable for me. She struggles with balancing her life. Okay, I don’t fight supervillains and I don’t stretch my limbs, but at one point I had to balance similar things: my family, their cultural background, my friends, trying to find my identity as a person, and figuring out where I fit in. It’s not something necessarily exclusive to people of multiple backgrounds, but it’s a story that allows everyone to empathize. 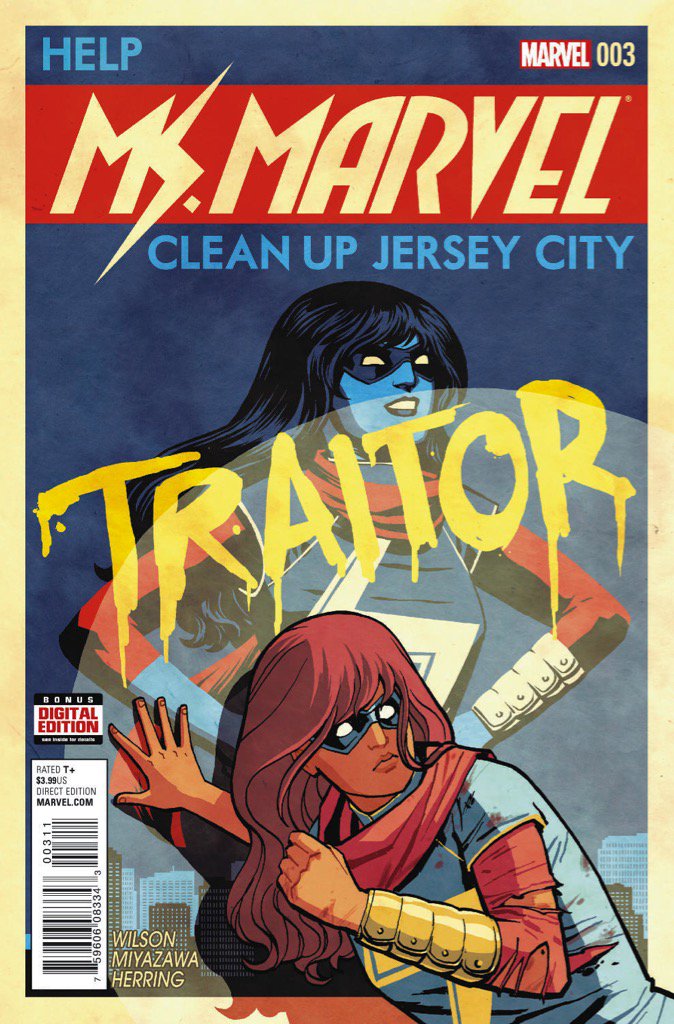 Muslims have become the latest group to be discriminated against, and having a character like Kamala Khan is a positive step forward. Now, it’s been over a century since the Yellow Peril, but not that long since internment camps. Something that’s sadly still relevant in this political climate.

Having an Asian-American Iron Fist — Danny doesn’t have to be Chinese, I’m just bringing my personal identity into it — allows us to explore a new cultural depth that is not in the mainstream.

Intolerance, bigotry… these things stem from ignorance and not understanding the person being discriminated against. Diversity in media is not for the sake of itself, but for the sake of enlightening your audience. Marvel has always prided itself on taking on challenging topics in their comics, it’s time to extend that to their other work. Give me my Asian-American Iron Fist!

11 thoughts on “Race, Politics, and the Third Self: Why We Need Iron Fist and Ms. Marvel to be Asian American”

The one and only. View all posts by Raph S