I’m still trying to wrap my head around the fact that somehow when no one was looking, Archie became the coolest kid in the room. Forget 90 percent of the titles being churned out by the Big Two. If you’re looking for quality and progressive comics, Archie is where it’s at. Yes Archie. Yes, you read that sentence correctly. No, I am not joking. Yes, we could be in Bizarro World. Let me get back to you on that one.

I’ve read Archie comics with a twisted fascination for many years. The whole Mayberry/Stepford theme was something of a morbid fascination. A comic book full of good-nature clean wholesome fun revolving around a gang of vanilla All-American teens required far more suspension of disbelief than any story about aliens, mutants or bionic ninjas.

Back then of course, the Archie issues would “fall in” with my stack of comics. If the cashier noticed, I would chuckle and ask, “How did that get in there? Well, since it’s already been pulled, I guess I might as well purchase it.”

I wasn’t fooling anyone.

These days when I go into my local comic book store, I wear the ‘A’ with pride…

Cashier: Hey, we got the new Green Arrow in.

Cashier: How about Iron Man?

Denny: How about no?

Cashier: We’ve got the latest issue of Wolverine where he battles the Hand…again.

Denny: NINJA PLEEZE!!!! Talk to the hand, because the only comic I’m interested in this week is Archie.

Denny: You got a problem with Archie? I KNOW YOU NOT DISRESPECTING MY PEEPULS!!!

Cashier: You people? I mean your people?

There is a reason for the major progressive shift with the franchise. Since new editorial management has taken over, there has been an emphasis on diversity: characters of various ethnicities as well as queer characters. The powers that be at Archie have been working to make it clear that Riverdale is that ideal town that everyone can be a part of.

In fact Keller’s debut in Veronica #202 came right off the heels of a critically acclaimed interracial romantic story arc between Archie and Val of Josie and the Pussycats. 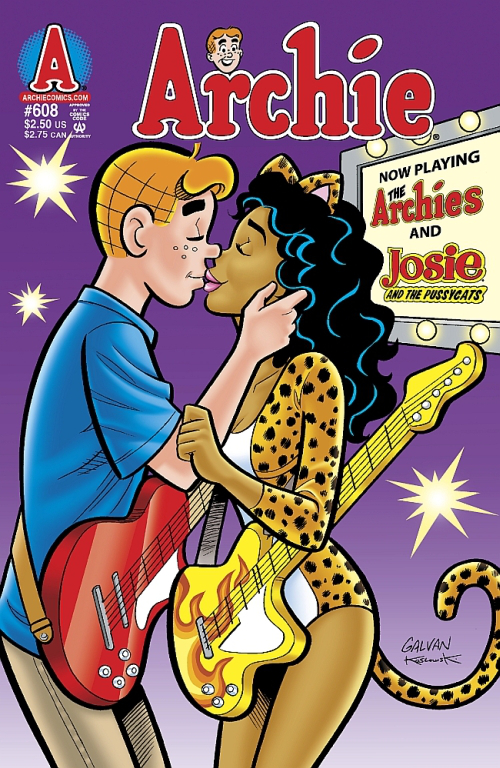 While the big two comic book companies often pay lip service to diversity, Archie is actually doing it, and doing it well.

The first two issues of the miniseries provide backstory on Keller’s history and show his journey into becoming the extraordinary young man he is today. They also pull no punches (no pun intended) in tackling bullying and homophobia. What really floored me was that first the two issues showed Keller fighting his own battles, defending himself and others and being strong. He wasn’t weak or helpless or the tragic gay that needed saving. As stellar as issues 1 & 2 are, the next two issues in the miniseries, however, is where business really picks up.

Issue #3 is pretty light-hearted and enjoyable in a typical Archie fashion. Keller is recruited by the gang to represent Riverdale High at the annual televised Witmasters competition. Only one problem: we learn that Keller has terrible stage-fright. In a series of flashbacks we learn that Keller’s phobia was contributed by the continual torment of an old bully and rival, Jerry. Nonetheless, Keller participates. So of course, Murphy’s Law kicks in and Keller’s past comes back to haunt him in more ways than one. With the support of his friends and family, Keller overcomes said fright and brings the win. He also has a run-in with Jerry which results in an unexpected turn where both teens make amends. This of course leads into Issue #4.

When issue #4 opens, we learn that Jerry has had trouble at home and is staying with the Kellers until his aunt is able to pick Jerry up. Meanwhile, student body presidential elections are coming up and the gang thinks that being the popular new kid, Keller, is perfect for the job and is once again volunteered. Keller is reluctant, but he soon learns what the rest of the world has known for ages, no force of nature will stop Veronica when she’s made up her mind.

What he initially believes will be a clean and amicable election against David Perkins, Keller soon learns that politics (of any sorts) are dirty and often rife with bigotry. Perkins launches a campaign encouraging voters to support him because he’s “A Real Man.” The mud-slinging and the microaggressions hit a fever pitch as stereotypes and other homophobic attacks are relentlessly hurled at Keller. Perkins is confident this tactic will work because “The students will never vote for a gay kid for president. They need a real man!”

Gay men aren’t real men. We’ve never heard this before. No matter what we accomplish, we’ll never be considered real men. Whether police officer, soldier, professional athlete, doctor, politician, we’re never “A Real Man.” Even though you’re reading this review on a computer, made possible by the achievements of one Alan Turing, we’re never real men. Even though he’s one of the few characters in comics who can call Sabretooth, Wolverine, Deadpool, Punisher, Daredevil, Batman, and Bane a bunch of punks (and can actually back it up), Midnighter will never be considered “A Real Man” by many. Whether president of student body or president of the United States, Keller will be deemed less than “A Real Man.”

But like the rest of us queer males who are “REAL MEN,” Keller knows who he is and doesn’t apologize or explain himself to anyone because that’s how “REAL MEN” operate. Again, what I loved about this episode is that unlike what we see too often in the media, Keller isn’t some helpless gay who is waiting to be saved by a cis straight white knight. He fights his own battles and stands tall against whoever steps to him because again, Keller is “A REAL MAN” and that’s how “REAL MEN” roll.

Issue #4 is very layered and sophisticated and even the most astute reader may find themselves catching something new with additional reads, such as the cosigning black students in the background who overhear Keller take Perkins to task on his bigotry. Yeah that wasn’t symbolism about the intersectionality of isms.

I’ve also been impressed by the continual theme of family throughout the miniseries. The Keller clan is a tight-knit and nurturing one, and a family’s love and support can make a world of difference for a queer kid who is facing homophobia in his or her day-to-day.

More than that, I’ve been impressed with how Keller’s Riverdale family steps up and stands tall. To be honest, this should be mandatory reading for fauxial justice fauxgressives on how real allies operate. Archie and the others have no qualms about telling homophobes off and standing up for Keller, even when Keller isn’t around, when it isn’t glamorous and when they have something to lose. Even Reggie, for all of his scheming and duplicity, won’t cross certain lines and will defend Keller rather than sit on the sidelines. Reggie might be a jerk, but he’s not a bigot.

People often forget that conservative bigots aren’t the only bigots. Liberal fauxgressives also constantly try to qualify that gay men aren’t real men and think we should stick to serving as their fashion accessories as issue #4 illustrates. These are the individuals who will spew platitudes about how homophobia is sooooooooooo wrong, and how they’re such an ally to the community but when it’s time for them to stand up for the gay co-worker, or even their online buddy who is being attacked by homophobic trolls, suddenly they’re nowhere to be found.

To quote Jay-Z, “You know the type, loud as a motorbike but wouldn’t bust a grape in a fruit fight.”

Or to go back to the MLK quote, In the end, we will remember not the words of our enemies, but the silence of our friends.

But what really brought this home was the message from Archie to Keller (and by extension LGBTQs everywhere) where Archie practically broke the 4th wall: Riverdale is what I’m all about…and you represent the best things about Riverdale! And Riverdale High! We all believe in you! Win or lose, you’re one of the gang! Get used to it!

While reading, my hands trembled and I dropped my iPad. Keller’s story could’ve helped me when I was younger. Reading about him would’ve made me not feel like some kind of freak or mistake. Maybe if I had more Kellers in my life, maybe my journey to acceptance wouldn’t have been as painful or as tragic. But better late than never. And there’s a whole generation out there who will have a champion in Keller.

And who is Keller? He’s the proud son of a military colonel. He’s a journalist and a writer. He’s the one guy on the planet who can actually rival Jughead in an eating contest. He’s proven to be a positive and calming influence on the always fierce Veronica. He’s strong, wise and kind. He’s the kid that any parent would be honored to call their son. Keller is all of those things and much more.

Make no mistake. Kevin Keller is a superhero in every sense of the word. For many of us, he’s a superhero that’s been long overdue. 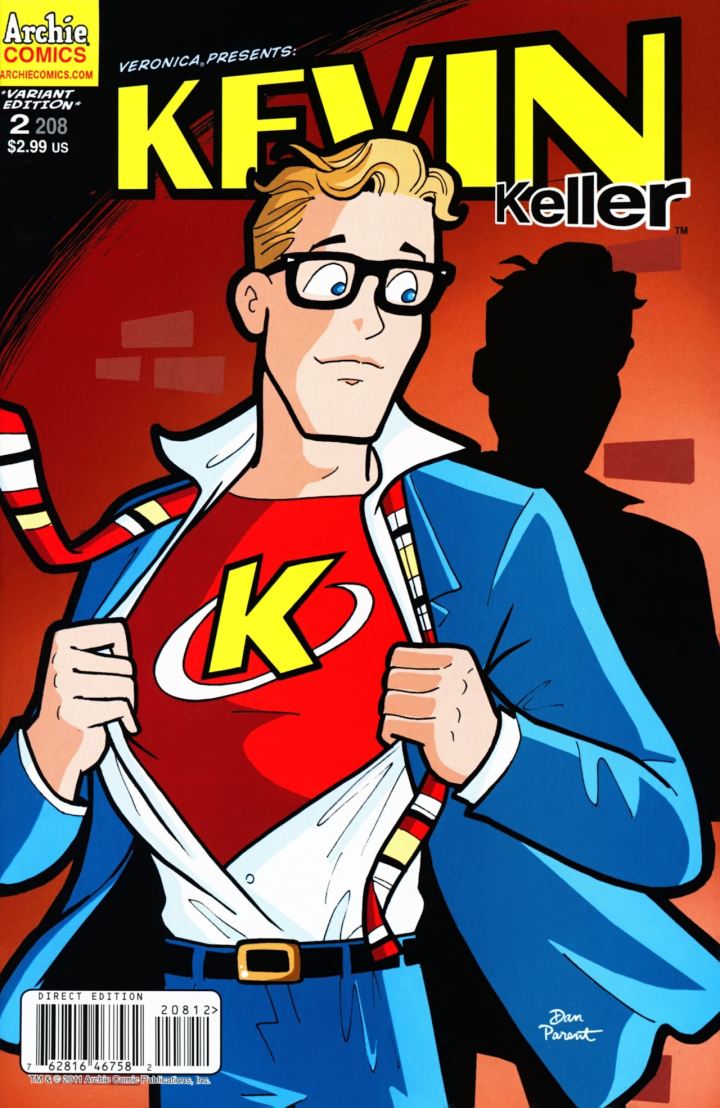