One of the problems with having so many television options is that if you fall behind, the shows can start to pile up. Unfortunately, I fell behind recapping Supergirl, so in order to catch up in time for Lexi Alexander’s directorial debut in National City tonight, I made sure I plowed through the last two episodes and will be covering both today. 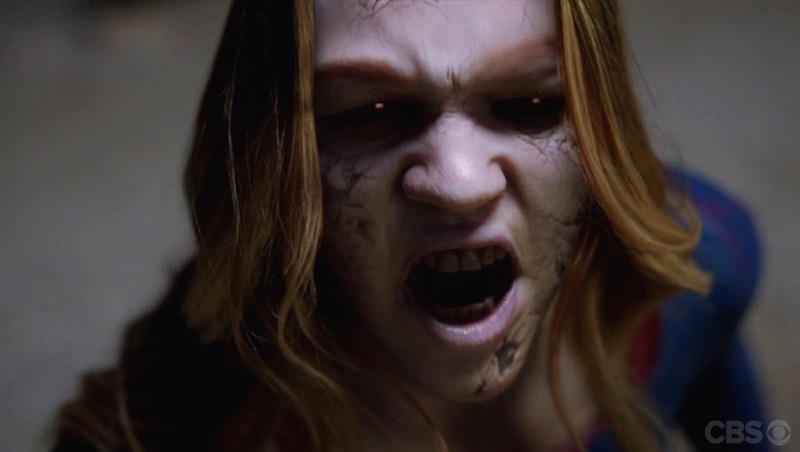 Granted, there have been a version of Bizarro Supergirl (or, simply, just Bizarro-Girl) in the comics, but in the context of the show, this is the first appearance of this type of villain. There’s no mention of Bizarro #1 ever terrorizing Metropolis, and in fact, Cat is the one who gives her the moniker. This also isn’t the first time writers have played loose with the Bizarro concept. He’s been everything from an alien from htraE to a Luhor-invented clone to a Phantom Zone wraith.

Also unlike the comics, this iteration of Bizarro-Girl is not a resident of Bizarro World but was created by Maxwell Lord. Remember the Jane Doe J’onn found a few eps back? Turns out Lord has been finding comatose young women who match Kara’s description and sciencing them with Krypto-powers. How Lord is able to do this, we’ll never know. (Something about pumping Supergirl’s DNA into Red Tornado’s severed arm).

Aside from the Bizarro-Girl stuff, the episode wraps up the storyline between Kara and Adam (played by Melissa Benoist’s real-life husband Blake Jenner) by ending the relationship. Since Bizarro targets Kara (because Maxwell knows her secret identity), Kara — in typical superhero fashion — tells her would-be love interest that they can’t be together. When Cat finds out that Kara has broken it off with her son, she takes the news worse than Adam.

Bizarro’s attack on Kara also confirms for her and the DEO that Lord is aware of Supergirl’s identity, so Alex heads to Lord Tech to arrest him. I can’t understand how this isn’t a bigger deal in the universe of the show. Can you imagine the kind of media circus that would erupt if a smarmy billionaire had to do a perp walk in front of the world?

Eventually, Kara is able to defeat Bizarro Girl (after she kidnaps James) using Blue Kryptonite and brings her into DEO custody. Before Hank puts Bizarro back into a coma (while DEO agents look for a way to reverse engineer what Lord did), Supergirl comforts her one-time enemy at her bedside.

Once everything is back to normal, Kara flies home to find that someone has left her the grossest plant ever in her apartment. If anyone has ever read “For the Man Who Has Everything,” the classic Superman story by Alan Moore and Dave Gibbons — or seen the similarly classic Justice League Unlimited episode of the same name — they would have instantly recognized Kara’s plant.

The next episode picks up exactly where “Bizarro” leaves off except we’re on Krypton and Kara is being woken by a robot named Kelex(!). Before we go any further, here is more proof that the Berlanti-verse is way more faithful to Superman mythos than anything the features side of WB is putting out. To wit, here is Kelex in the comics:

This is Zack Snyder’s take on Kelex in Man of Steel: 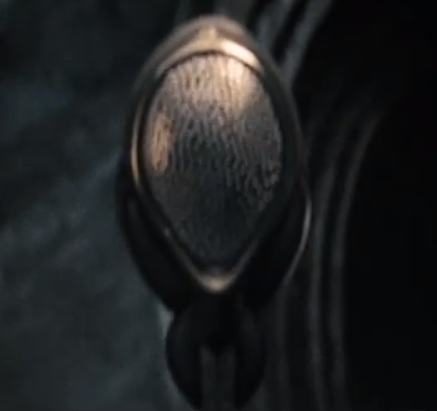 Mind you, Supergirl has a TV budget. Anyway…

When Kara awakens in her Kryptonian bedroom, she instantly thinks she’s hallucinating. Not even reassuring words from her mother are able to calm her down. This is a major difference from the original Superman story because I believe Clark fell for the illusion rather immediately — which made it all the more difficult to break free once he realized it was all a dream,

Anyway, Kara is less gullible than her cousin, so it takes a while for the Black Mercy fantasy to really kick in. But when little prepubescent Kal-El shows up, “Earth” starts becoming a distant memory.

Meanwhile, back in the real world, James and Winn start getting worried that Kara hasn’t shown up for work. They, with Alex, go to her apartment and find Kara comatose and wrapped in the grip of the Black Mercy.

The three of them rush her to the DEO — much to Hank’s dismay — but no one can figure out how to help her. Everything they try only makes the problem worse. Then Alex gets the brilliant idea to have Maxwell Lord — whom she suspects is behind it all — to devise a way to free Kara.

Aside: but how long has Lord been in DEO custody, again? Shouldn’t the news be all over the fact that a government organization just straight up kidnapped a billionaire CEO? Like, there are literally hundreds of articles about Tim Cook not helping the FBI, shouldn’t CatCo or some one be reporting on the disappearance of Lord?

Anyway, Max proves he had nothing to do with it but figures out a way to send Alex into Kara’s dream Inception style to convince her sister to abandon the fantasy on her own free will. You see, the Mercy will only give up its victim if she willingly rejects the hallucination. Alex learned this after being confronted by Astra, who she also suspects.

Astra, it turns out, also had nothing to do with sending the Black Mercy. We’ve seen throughout the series that despite being Kara’s enemy on Earth, she still holds a soft spot for her niece. Instead, Astra’s lover/second-in-command Non is the one who sent the world’s worst flower arrangement to Kara. He figured since he wasn’t allowed to kill her, he could at least make her comatose for an indefinite amount of time while the Kryptonian baddies put their plan in motion.

Back at CatCo, Hank/J’onn must once again don the guise of Kara — this time in her civilian identity and not in her superhero one. While it was an awesome gag, I did think it was a little out of character for J’onn. We’ve seen him mimic Supergirl flawlessly in the past. Maybe it’s the heels?

Once Lord is finished making his Inception contraption, Alex is sent into Kara’s mind, aka Krypton. While there, we find a Kara that has completely given in to the illusion, and she seems happy. Which is why it is all the more heartwrenching for Alex to pull her from this happiness and tell her there is no spoon. Unfortunately, Alex is sentenced to the Phantom Zone for her troubles.

Alex’s sisterly love breaks through to Kara, though, and she finally wakes up from her dream.

She’s just in time too because Astra and company are in phase one of their plan to destroy the world (via Dish TV apparently). Supergirl speeds to a rooftop to confront her uncle in law while Alex and a fully decked out Martian Manhunter take on Astra. Remember, we’re watching television on a Monday, but this fight is better than every superhero movie pre-2008.

Alex ends up killing Astra with her Krypto-blade, but J’onn takes the blame when Kara finds her dying aunt. We’ll see how these secrets and lies will affect our heroes going forward. In the meantime, Kara is back with her friends (including Winn) and they all reconvene at her apartment over potstickers and ice cream.

And all is well in National City. That is, until Master Jailer and Lexi Alexander show up!