After taking a week off, Supergirl returns with an all-new episode on CBS tonight. The episode that aired two weeks ago — simply named “Solitude” — was probably the most easter egg-packed episode of the season. Rather than a traditional recap of the events, I’m just going to geek out over all the cool nods to past Super-lore, including and especially call backs to Smallville since former Supergirl Laura Vandervoort was guest starring. Which is basically what I did while live-tweeting anyway.

Gotta say, as psyched as I am to see #Supergirl honor its heritage with @Vandiekins22 #Smallville season 7 was my least favorite. #SupGirl

First geek out moment: the episode starts with a flashback to when Kara’s pod was stuck in the Phantom Zone. Kara is in stasis when a console on her ship lights up with the logo of Brainiac!

I’m glad Supergirl is unafraid to utilize classic Superman villains. We’ve had six (going on seven) live action Superman movies in the last 40 years and he only ever battles Lex and Zod on the big screen. It seems television is the only place to get the other members of the Super family’s rogues gallery.

Hank reverts to his Martian form when sparring with Alex. We need more episodes with J’onn in his Manhunter glory. Coincidentally, an upcoming episode will dive into how J’onn became Hank, so definitely looking forward to that.

You see, Kara has left her post at the DEO, and Alex continues to blame herself because she hasn’t come clean about Astra’s death (Kara still blames J’onn). But you know, it wouldn’t be an homage to Smallville if “secrets and lies” weren’t a big part of the show.

Speaking of which, James wants to spill Kara’s Super-secret to Lucy because they’re having relationship problems. And yes, Kara thinks that’s a stupid reason to reveal her secret identity too. Lying and cheating is a theme to tonight’s episode because this week’s MacGuffin is a thumb drive that contains the identities of cheating spouses when an Ashley Madison-like website gets hacked. The hacker? None other than the last person to play Kara Zor-El:

It was a nice touch to have Laura appear on the episode looking like her regular self — since she would spend the rest of the ep in Mystique cosplay — if for no other reason than to remind folks of what she looked like on Smallville when she was Supergirl.

Later, Winn attempts to hack the hacker but is stopped when a being materializes out of his laptop. Instead of the blonde who bore a striking resemblance to Supergirl, he is confronted by woman in blue who calls herself “Indigo.” In actuality, she is an artificial intelligence created on Krypton called Brainiac-8.

When the DEO shows up, Kara is pissed and wants to go somewhere to cool off? What better place than the North Pole? James suggests they take a visit to Superman’s Fortress of Solitude to get some answers, and this is where the producers throw in every Super Easter Egg they can think of!

The first one? None other than a giant “key” to Fortress that’s straight out of a comic book!

YES! They have a gigantic ass golden key to get into the Fortress of Solitude! #Supergirl #SupGirl pic.twitter.com/GTzyo5ZiL1

Upon close inspection, the key also kinda sorta resembles the Kryptonian Command Key from Man of Steel except it’s gold instead of grimdark.

Once inside the Fortress, we’re shown all of the wonders and amazing things from the giant Jor-El and Lara statues to a return visit from Kelex! Also, there are trophy cases with things like a Legion ring. This isn’t the first time a Legion ring has been depicted in live action. Back when Barry and friends dimension-jumped to Earth-2, a ring could be spotted in tunnel between the worlds.

But even before the Legion was teased on The Flash, we met actual Legionnaires on the eighth season of Smallville. Back then, Clark was visited by Cosmic Boy, Lightning Lad, and Saturn Girl. If the Legion ever make an appearance on Supergirl, here’s hoping they invite those actors back. 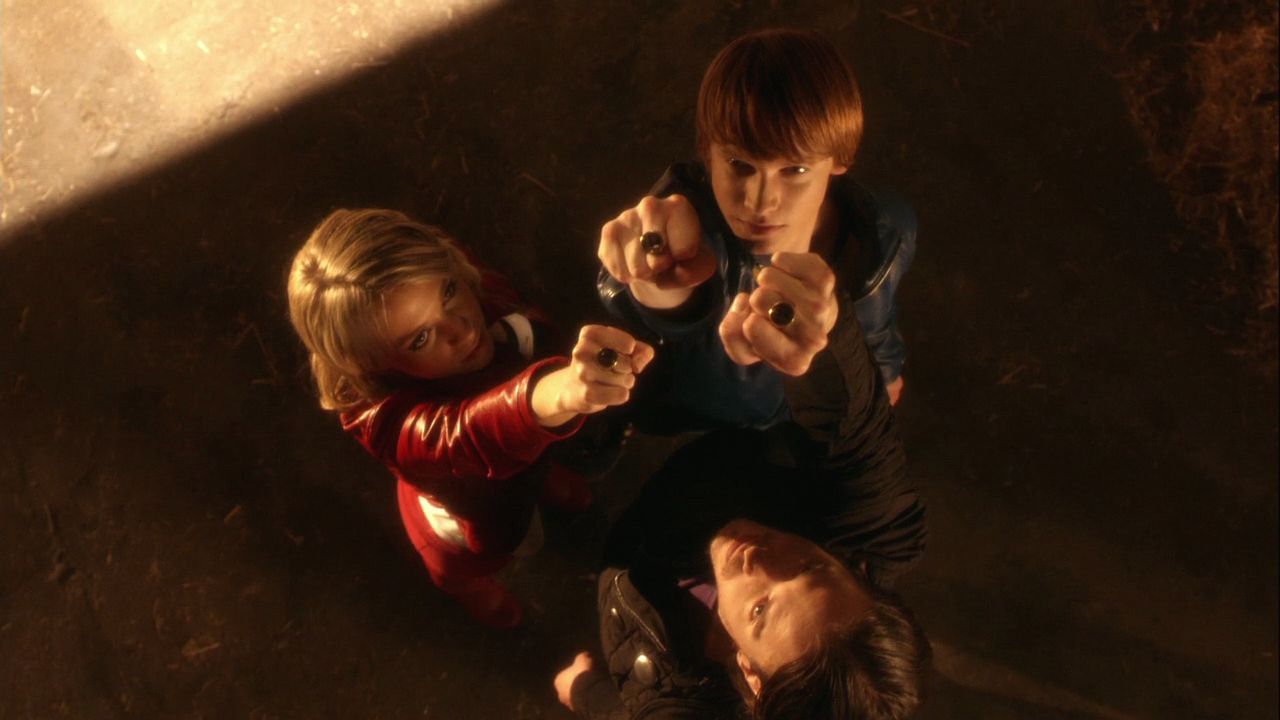 After Kara learns everything she needs to know about Indigo/Brainiac-8, she heads back to face her without the DEO’s help. This will probably be a mistake. Especially because Indigo ain’t playing around.

By the way, another geek out moment for me was seeing that the Supergirl producers reinstated the original Kryptonian alphabet.

Though it was created for the comics, Smallville used this text all the time. But Man of Steel decided it was going to create its own version of the language.

Anyway, Indigo materializes out of the cell phone of a general and hacks into the city’s nuclear missile outpost. Supergirl arrives but not before the missiles have been launched.

Kara superspeeds up to the missile to disable it — with help, in her ear, from Hank. This is another scene that echoes a classic Smallville moment.

This whole ep's like a #Smallville homage. I mean, they basically recreated this scene: @christellexoxo #Supergirl pic.twitter.com/UyEF7aph1v

Fortunately, the missiles get disarmed and Indigo gets dispatched. Unfortunately, Non is able to reconstitute the android using the Omegahedron, which is a direct call back to the Supergirl movie from 1984.

In an episode full of call backs and Easter eggs, this was definitely a deep cut. But the Smallville references don’t stop since the newest Supergirl will be dabbling in Red Kryptonite, which was a staple of that show as well. Be sure to tune in while we live tweet!