So let’s talk about Suicide Squad, one of the most highly anticipated films of the year.

Figuring they’re all expendable, a U.S. intelligence officer decides to assemble a team of dangerous, incarcerated supervillains for a top-secret mission. Now armed with government weapons, Deadshot (Will Smith), Harley Quinn (Margot Robbie), Captain Boomerang, Killer Croc and other despicable inmates must learn to work together. Dubbed Task Force X, the criminals unite to battle a mysterious and powerful entity, while the diabolical Joker (Jared Leto) launches an evil agenda of his own.

The verdict? There was some pacing issues and the worldbuilding/mythos was a bit rushed, especially considering this is only the third movie in the DCEU universe. Definitely some areas of opportunity in terms of the editing. It made the one scene with Amanda Waller handing out pinkslips gangsta style a bit on the nose.

Thankfully, we get bare minimum Jared Leto. Because seriously, fuck that guy.

Suicide Squad is a fun popcorn movie that’s got heart, strong characters, and a pretty solid story. It proves to be far superior to 95 percent of the crap Marvel has produced. Anyone have any objections to that? What about you Billy Jean? Oh okay then.

But I now understand why Rotten Tomatoes and early reviews trashed this film.

DC just gave Marvel/Disney and fandom the middle finger in proving that diversity and artistry are not mutually exclusive.

This film features two black leads, a white bisexual protagonist, Asian, Native American, and Latino characters who are well developed and have their own agencies.

Suicide Squad is a meta commentary on outcasts — and by extension Nerds of Color (see what I did there), LGBTQs, and other minorities. This movie is for the outsiders who were too black and/or too gay and weren’t allowed to join the Avengers and by extension the Mickey Mouse Club. See Paul Mooney if that reference evades you.

My buddy Zahir said it best, this movie is for us and celebrates us. A fact proven even moreso when my squad Zahir, Benjamin, and fellow N.O.C. crew Desiree and Rodrigo were able to discuss and celebrate being black, brown and queer geeks in a safer space.

Unlike the MCU, on the movie front DCEU is even willing to diversify its Big Bads and include a villainess, Enchantress. 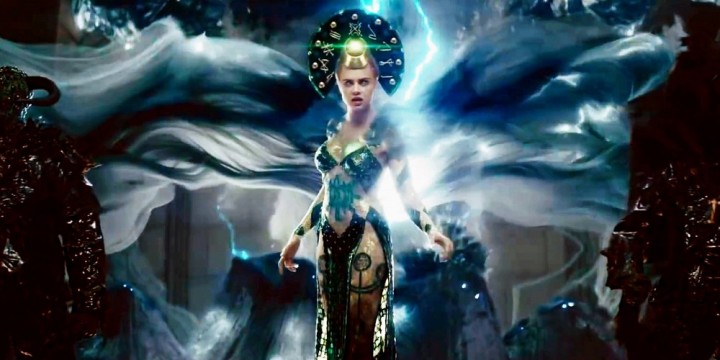 And while we’re on the subject of women let’s discuss how the ladies of this film kicked ass on every conceivable level. From Enchantress to Katana to Harley Quinn to Amanda Waller herself.

What’s interesting is that in terms of the comics, Marvel has dominated in sales and has been killing it in terms of diversity. Meanwhile the MCU leaves much to be desired and the only reason it’s moving away from the straight white guy narrative is because of competition from the DCEU. DC Comics have been a walking fustercluck on the printed page but they’ve slayed in terms of diversity and quality in their films.

Also this movie also makes history because for the first time ever, the Batmobile gets upstaged by another car… the chariot of the gods: the purple Lamborghini.

And speaking of “Purple Lamborghini” and other tracks, the Suicide Squad soundtrack is the mother effin TRUTH!!!!!!

Say what you will for the DCEU, whether you agree all of their with their decisions or not, if they are guilty of anything it is going hard to appeal to their fanbase. Case in point: The #AAIronFist campaign was straight up ignored by Marvel/Disney. The #KeepIrisWestBlack campaign was embraced with open arms by DC/Warner.

And folks wonder why I’m here for the DCEU.

But back to Suicide Squad. This movie gets an A-/B+

This concludes my list of highly anticipated films for 2016. You can have the theaters back now.

Also, if you haven’t already. Check out Waller and the rest of Task Force X in Batman: Assault on Arkham.

Say it with me kids, #SquadGoals.