Remember comic books? Those flimsy sheets of paper emblazoned with colorful superheroes battling diabolical supervillains in space, in an underground lair, in a bunker, under the sea, or in parallel dimensions? Those passports to wonder that are the progenitors of the DC and Marvel Cinematic Universes and their respective television properties? Yeah, they’ve been completely overshadowed by their on-screen interpretations. Most people enjoying super heroics on the big and small screens aren’t comic fans. This isn’t a bad thing. I know tons of people who loved the Harry Potter films, but have yet to read word one of J.K. Rowling’s epic texts. There are still some of us who are huge comic book fans, and have been feeling a little cheated by the Big Two.

All isn’t lost in the lands of DC and Marvel. Both companies are putting out some quality content.

DC has a few really good books out right now:

Gotham Academy. Such a great world.

And Gotham by Midnight has the potential to be a breakout series.

For a while, I had to steer very clear from DC’s mainstream super-books because the New 52, and its aftermath, was just so underwhelming on almost every level from creativity to enjoyment. Now it is Convergence. Not sure where DC’s priorities are—or how much of a say their parent company, Warner Bros. has—but these events are getting old, and are wholly uninspiring. But the aforementioned titles, and a handful of others, are worth your weekly trip to retrieve your pull.

There is just no way around it; Marvel is having almost supernatural success on the big and small screens. But it seems as if it is their priority. I get it. Film and television make more money than all their titles combines. But it feels like they are being nigh contemptuous of the comic fan. Just take a look for their anti-support of the Fantastic Four book and Fantastic Four and X-Men merchandising. But Marvel is providing us with some wonderful reads: 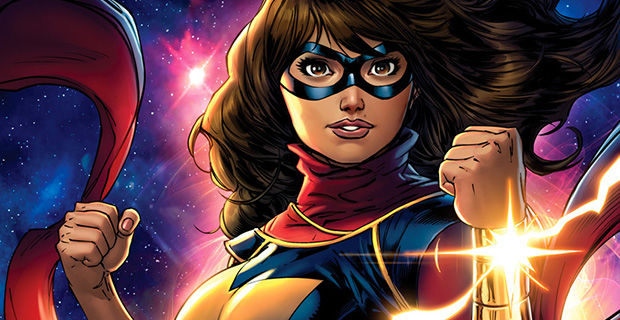 Ms. Marvel is a joy to read month-to-month.

I don’t care for the Star Wars films — or the now defunct Expanded Universe — but Marvel’s Star Wars comics are great.

Battleworld (check out issue #2 to see the most unlikely pairing, once again written by David. F. Walker) kick-ass.

But I’m still experiencing Marvel as brushing off the folks who got them through their bankruptcy (remember that) by allowing their Disney to show more and more: “We’re a successful movie studio now, and comics are kind of over. We roll with the Mouse.”

But the greatest thing about comics is that you do not have to rely on the Big Two. I’ll concede that DC and Marvel are the Big Two in terms of space they take up. They are everywhere. I’d put them in the Big Three or Four when it comes to enjoyment. I would give the number one and two spots to Image Comics and Archaia from Boom! Studios. If you are feeling like Bats and Spidey are letting you down, I urge you to give these two a try.

Off top, with Image, you can get initial story runs collected for $9.99. What a respectful thing to do for your audience. five to six issues for this price is a godsend when comics are the first to go when you have to create a workable budget.

Second, they produce East of West.

Hands down, East of West is my favorite comic since the demise of Planetary. I won’t even summarize it here for you. Just go and pick it up. Now. For real.

The second volume of Danger Club dropped on June 10, 2015. Danger Club is another book you need to read. It is inventive in a way that most superhero books no longer care to be, but has enough (non-cynical) self-awareness to poke fun at legion of superhero tropes.

Also, Hoax Hunters is freaking phenomenal. Imagine a monster/legend hunting reality show that is a cover for actual monster hunting. Yeah, cop this, too.

For some super wild reads, Archaia has a few titles that I recommend wholeheartedly.

The Reason for Dragons is a necessary whimsy.

Mouse Guard is a long-time favorite for tons of people. Great art and storytelling.

They’re doing justice in their continuation of the Space: 1999 universe.

And for one of the most complex and intriguing systems of magic rendered in the comic form, grab the collected The Secret History.

While many of you, I’m sure, are beholden to the DC/Marvel axis, I urge you to venture out. There is a wealth of stories (many of them better) from other publishers.

DC and Marvel may continue rehashing their cataclysmic gimmicks ad nauseam, expecting us to fawn over the scraps of their increasing lack of imagination. There are other sources out there — publishers who still care about comic books, instead of using comics as mini proof-of-concepts for film or television properties.

Go and get your fix.