I had so much fun watching NBC’s airing The Wiz: Live! on network television. Having grown up with the original, I was curious to see how the new version would stand up. And now I’m going to slip into gush mode because you guys. YOU GUYS. IT WAS AWESOME. We sooooo needed this, especially in this time where most news about blacks are seeded with shootings, protests, micro-aggressions, and fear. The Wiz: Live! was a welcome — and very much needed —  celebration of black culture in all its forms.

Shanice Williams as Dorothy was adorable, freakin adorable, with a hint of backbone in that you don’t mess with her. Elijah Kelley had big shoes to fill as The Scarecrow, but his performance not only gave a nod to Michael Jackson’s spin on the character (ha, literally!), but he also made it his own.

May I give a shout out to the crows? Omigosh I want a whole entire story dedicated to them because they were so awesome! And hot!) I haven’t listened to Ne-Yo’s work, but he made for a smooth Tin Man (oh, the lube jokes on Twitter).

Hello Ne-Yo. I see you. #TheWiz

And David Alan Grier as the Cowardly Lion. YOU GUYS HE CAN SING! And the dreadlocks on him made him look both fierce and cuddly. How can that even happen?!

But let’s talk about Oz herself, played by Queen Latifah. There were so many facets to her character: the green hair stripe, suited butch as The Great And Powerful Oz (her punctuation with pyrotechnics should be a goal of every black mother laying down the law), the messy-haired, bathrobe and pajamas mistreated huckster hidden behind the tough shell, The smooth dressed powerhouse, encouraged by Dorothy and the others to head back to Omaha with her head held high.

Have I already mentioned that Queen Latifah's gorgeous. She's so gorgeous. #TheWiz

Latifah’s casting was brilliant. She managed to be handsome and beautiful, fierce and vulnerable, weaving so many contradictions threads into a beautiful feminist whole. Forget that pale Oz the Great and Powerful movie Disney did a couple of years ago. I want a movie based on her.

As a whole, I really enjoyed the character development. I liked that as Dorothy’s party grew, it wasn’t instantaneous “let’s all be friends.” There was plenty of bickering, suspicion, and ribbing between the four. It was a joy to watch as they learned to trust and help build each other up throughout the musical. Very much appreciated that. 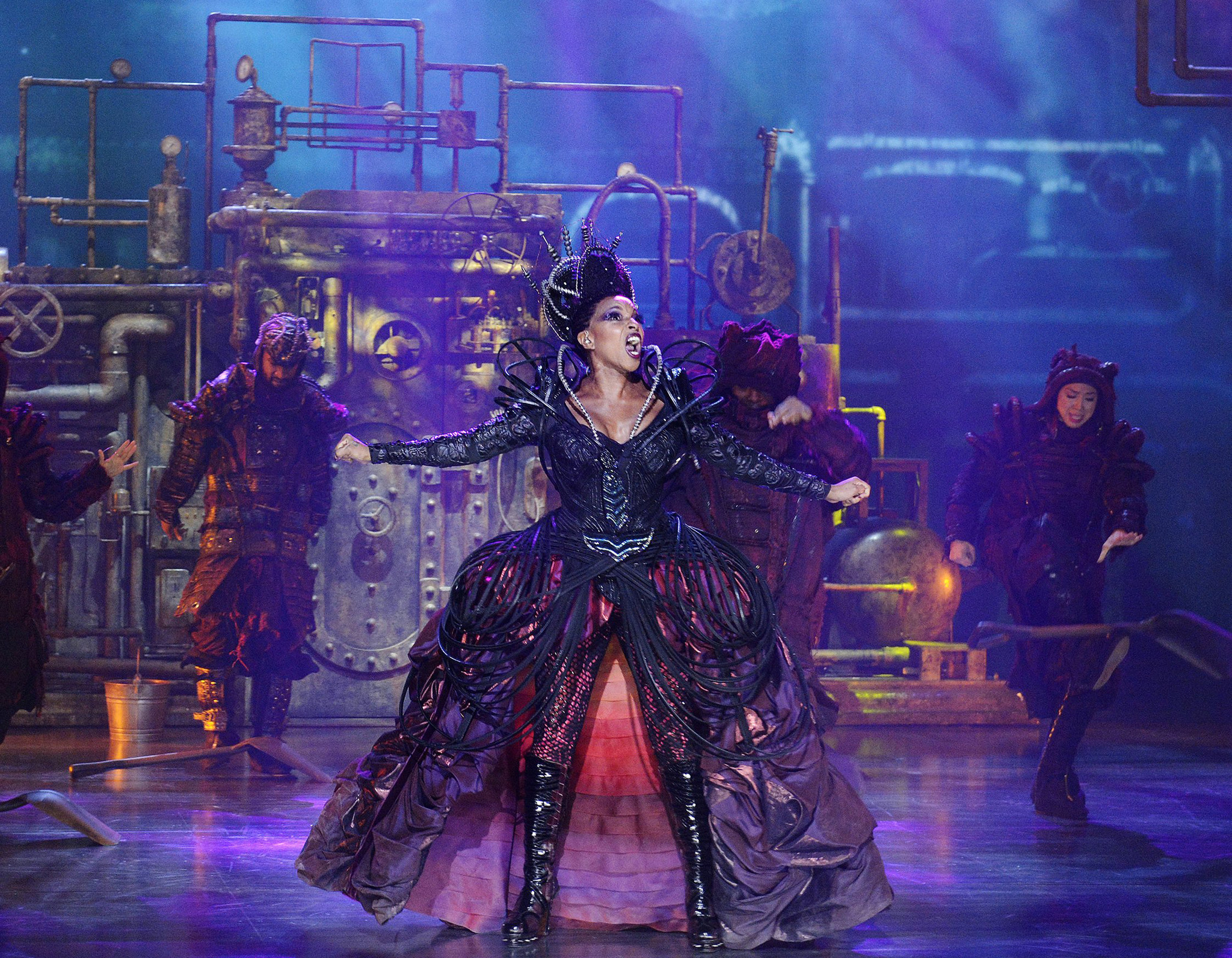 My only quibble is when they reach Evilene’s domain. In the 1978 movie, Evilene tortures Dorothy’s friends to try to get Dorothy to take off her shoes. But Mary J. Blige’s Evilene has just barely begun to posture when Dorothy splashes her, and suddenly everyone’s all “Brand New Day.” It made the whole scene feel rushed, which was a shame, because Mary J. Blige slayed as Evilene. Her costume was delightfully gothic and steampunk, and she killed with her rendition of “No Bad News.”

Oh, and Stephanie Mills tying the past to the present as stalwart Aunt Em! Amber Riley hilarious and fun as the Good Witch of the North! Uzo Aduba all golden and sparkling as Glinda! The Cirque du Soleil influence throughout! And oh, Oz the city! The costumes! The Voguing! Common as the hard-ass bouncer! The dancing! Wonderful shout-out to the black queer community and afrofuturism! The Big Giant Head Complete with Neck Roll! Yasssssssss!

@TheNerdsofColor Well @YayPaulMcGinnis & are all done puppeteering it from inside, so enjoy! pic.twitter.com/TENi1WTKcn

There better be someone writing fanfic of a epic showdown between the denizens of 2015 Oz vogueing against the 1978 denizens of Oz’s disco-strutting. Truly such a thing would be epic and glorious.

Does 2015’s The Wiz: Live! hold up to the 1978 movie? Yes and then some. The costumes alone should have cosplayers scheming for their next con. Latifah’s portrayal of Oz should be subject enough for several feminist con panels (my own suggestion: Latifah’s genderqueer Oz flipping the maiden/mother/crone motif).

And best of all, people will now be going back to the original movie to watch with their children. My son loved this musical so much, he shut off his video game when the musical came back after the commercials.

If that’s not high praise, I don’t know what else is.

7 thoughts on “The Wiz Live! Wrap Up: Brand New Day”

I am a African-American speculative writer in Madison WI. I've written short stories and poetry, and I'm working on my first fantasy novel. I'm the editor of Giganotosaurus and a book reviewer for Lightspeed Magazine. I also enjoy reading, knitting, and anime. Visit me at my blog, The Cafe in the Woods, at tbonecafe.wordpress.com. View all posts by LaShawn